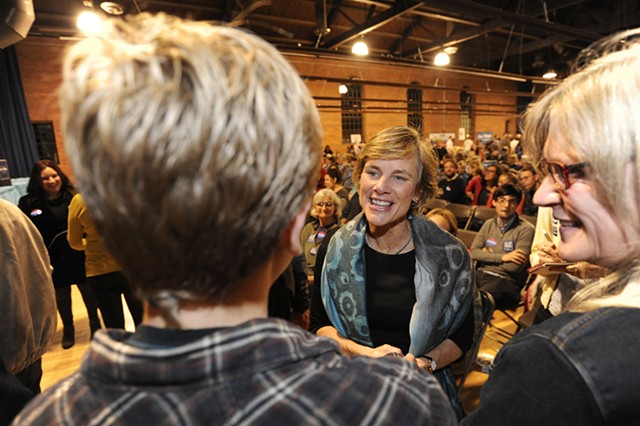 The National Education Association has joined a coalition of special-interest groups financing television ads in support of Democratic gubernatorial candidate Sue Minter, according to a new filing with the Secretary of State's Office.

The national teachers union, whose Vermont affiliate endorsed Minter in August, contributed $75,000 over the past week to Our Vermont, a super PAC founded and largely funded by the Democratic Governors Association. Our Vermont has spent nearly $639,000 over the past three weeks and more than $1.3 million since the August primary.

"Educators strongly support Sue Minter because she is dedicated to students, educators, public schools and a thriving middle class," NEA political director Carrie Pugh said in a written statement. "Sue will be a governor who will work tirelessly to ensure that all students have the opportunity for a high quality public education, regardless of their ZIP code. She will put the interests of Vermont's children first, while making sure that educators have a partner in creating Vermont's education policy."

While the NEA may support Minter for her education policies, the ads it is sponsoring don't mention the subject. One features Sen. Bernie Sanders (I-Vt.) discussing his support for Minter. The other attacks Minter's opponent, Republican Lt. Gov. Phil Scott, for his position on abortion.


Separately, the DGA has directed another $350,000 to a super PAC run by the Planned Parenthood Vermont Action Fund. That entity has spent more than $420,000 on anti-Scott ads in the past two weeks, according to recent filings with the Secretary of State's Office.

In that same period, a super PAC funded by the Republican Governors Association, called A Stronger Vermont, has spent $963,000 backing Scott. The Republican State Leadership Committee spent another $12,254 on mailers that advocate for Scott and legislative candidates.