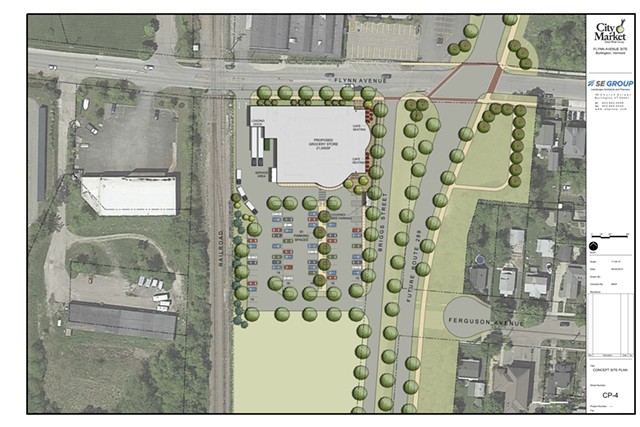 Polluted soil at the site of the new store, which has a target opening date of October 2017, will cost the company more than $250,000 to clean up, according to Pat Burns, expansion store project manager. Construction of the 14,000-square-foot store is due to begin by early December.

The cleanup costs didn’t come entirely as a surprise. When City Market purchased the parcel in 2015, site analysts gave a “ballpark” estimate, Burns said. Anticipated costs have risen as the project progressed; early estimates stood at about $170,000.

Developers found that the site, at Flynn Avenue and Briggs Street, contains polycyclic aromatic hydrocarbons, chemicals that result from burning coal, gas, or wood. The PAHs are a result of years of industrial use at the site. Vermont Structural Steel occupied the location for much of the 20th century.

Petroleum has leached into the soil as well, Burns said.

PAHs, which have been linked to cancer and poor fetal development, occur widely in Burlington’s post-industrial downtown.

“It’s the same dirt that everyone in Burlington is dealing with,” Burns added.

The costs cover various mitigation measures. Most significantly, City Market will install a vapor barrier under the store’s foundation, a series of underground tubes that direct vapors away from the building. Workers will also put in a foot of clean soil under the 114-space parking lot as a “cover in place” remediation.

Contractors will determine where the contaminated soil that is removed ends up. It will likely be transported to a solid waste transfer station in southern Vermont, where it will be incinerated to remove the contaminants.

Over the last year, City Market has undergone a two-part environmental planning process, contracting Stone Environmental in Montpelier and working with the Department of Environmental Conservation. Last May, the company submitted a corrective plan to the DEC, and hopes to get the state’s okay on the proposal on November 8.

Permitting has proceeded more slowly than originally planned. “It’s a complicated process, simply because of the oversight done by DEC and because of all the things that have to come together,” Burns said.

The new store will have more retail space than the existing one — 2,000 square feet more. Its parking lot will be nearly twice as big as the cramped and busy one at the downtown store.

The design includes a second-floor meeting space, a teaching kitchen, a ground-floor prep area, outdoor café seating and a discovery garden, according to the co-op’s website.

Last spring, City Market held community engagement forums and completed a traffic study for the location. This Friday marks the last day for public appeal on the project. If no objections are filed before then, initial work could begin as early as Thanksgiving, Burns said.