Al Franken Stumps in Burlington for Vermont Democrats | Off Message

But standing next to her on the sidewalk outside Nectar’s on Main Street in Burlington, Franken let somebody slap a Minter-for-governor sticker on his shirt and encouraged Vermonters to vote for her.

“I know she is a fighter for the middle class, that she doesn’t believe in trickle-down economics,” he said. “She’s a Democrat.”

Minter is competing with Republican Lt. Gov. Phil Scott in the November 8 election. Polls — and the candidates — say the race is close.

Asked if he would have supported any Democrat who Sen. Patrick Leahy (D-Vt.) asked him to, the former “Saturday Night Live” funnyman deadpanned, “I had to vet Sue. We went through a long vetting process.” He paused, then said, “I’m joking.”

Franken stopped in Vermont on his way to New Hampshire, where he will be campaigning for Democratic presidential candidate Hillary Clinton. Franken stumped for Vermont Democrats at the behest of Leahy, a fellow member of the Senate Judiciary Committee. Franken was doing what politicians do — lending his celebrity to help his party.

Dressed casually in khakis and button-down shirt, he patiently paused for a steady stream of selfies everywhere he went.

The two-term Democratic senator was serious about his politics.

“I am sort of the poster boy for close elections. I won my race in Minnesota, out of 2.9 million votes, by 312 votes,” Franken told a gathering of about 40 of the Democratic faithful at Nectar’s, less than an hour before Vermont’s voter registration deadline. “It’s absolutely essential that you get out and vote.”

He had just enough of a comedian’s smirk that it felt as if Franken was perpetually on the edge of a joke.

“We really don’t want Donald Trump,” he said, and the audience snickered in anticipation of a punchline. “It’s not a joke. I’m worried,” he said. “We have to win this."

To encourage the crowd to vote early, Franken led the crew of candidates and voters on a parade of sorts up Main Street for half a block to City Hall. There, a smattering of voters were sitting in the hallway, filling out ballots for early voting.

Leahy walked down the hall, pausing to pose for photos and talk to voters as they filled out the ballot on which he is competing for an eighth six-year Senate term. Franken followed. For a few minutes, the hallway became part voting booth, part photo booth.

Zuckerman started down the hall, then stopped and put his hand over the campaign sticker that adorned his lapel. Campaigning isn’t allowed inside a polling place, he noted, before backing away.

Franken and Leahy mingled for a few minutes longer, then left the building. 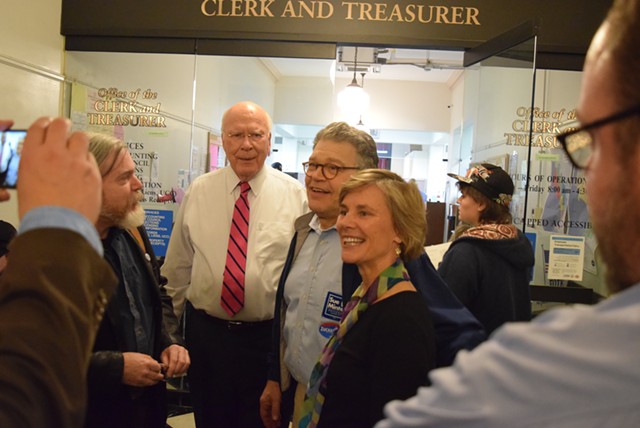