Seven Things to Know About the General Election in Vermont

Voter fraud? A rigged system? Concerns are surfacing nationally in hard-fought, weird and memorable political contests as Election Day approaches. Vermont Secretary of State Jim Condos and his staff sat down Tuesday to talk about the November 8 election.

System security: Vermont’s election website, including its voter checklist, showed no security issues in two recent scans by the U.S. Department of Homeland Security and one by a private cybersecurity expert, Condos said. “I don’t want to say it can’t be hacked,” Condos said. “We have taken every step we can.”

Integrity of votes: Vermont uses paper ballots, which most towns count with electronic tabulators. They, in turn, record the votes on a memory card. The tabulators are not connected to the internet and the paper ballots are retained for possible recounts. In towns where ballots are counted by hand, Condos said, “The counting is not done by one person.”

Poll watchers: Each political party and independent candidate can have up to two poll watchers per voting site on Election Day. The only options they have, by law, to challenge someone’s right to vote is by questioning whether the person has already voted or whether they are the person on the voter checklist.

Registering: If you’re not yet signed up to vote, you have until 5 p.m. Wednesday. You can register online, or at your town or city clerk’s office.

Ballots: You can find a sample of your local ballot and details about your polling place or request an absentee ballot online at the Secretary of State’s office. (And you can also see who’s on your local ballot by visiting sevendaysvt.com).

Turnout: A record number of Vermonters — 465,483 — have registered to vote. Some 51,303 of them had already voted as of Monday afternoon. Presidential election year turnout tends to be 65-72 percent of those registered.

Results: Town and city clerks will report results election night directly to the Secretary of State’s Office website, where you can follow them in real time. Polls close at 7 p.m. Don’t expect any results before 7:30 p.m. “After 8 is when it picks up speed,” election director Will Senning said. 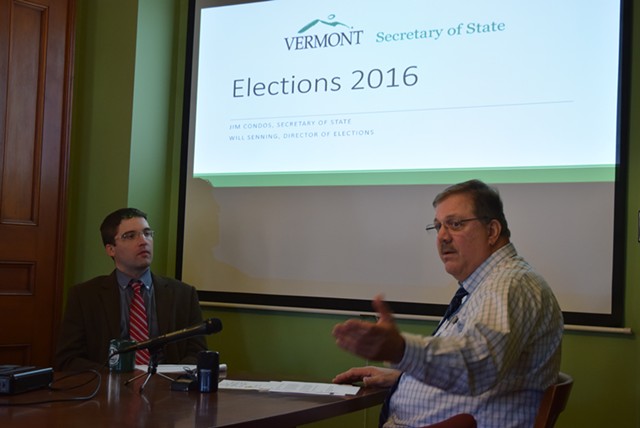