The Unsworth family wants to build a three-story building with artist studios and offices on prime real estate in Burlington’s South End.

Unsworth Properties owns one of the most bustling blocks in the thriving arts and business district known as the Enterprise Zone. The conglomeration of brick, metal and wood buildings along Pine Street — which once served as factories producing soda, blinds and brushes — have been repurposed as artist studios, restaurants and business spaces.

The Unsworths are proposing to tear down two industrial structures and a duplex located behind the Howard Space building, at Pine and Howard streets, and replace them with a three-story building and underground parking. They plan to put about 15 artist studios on the first floor, while the second and third floors would host offices and possibly more studios. The building would have a footprint of roughly 8,500 square feet.

The Development Review Board will review a sketch plan Tuesday — the first step of what will likely be a lengthy review process.

The two industrial buildings — one is brick, the other is a large red warehouse — are in bad shape and currently used for storage, according to co-owner James Unsworth. Although one was originally used to store bristles from the brush factory, Unsworth said he’s consulted a historical expert. “They really don’t have much, if any, historical significance to the property.” 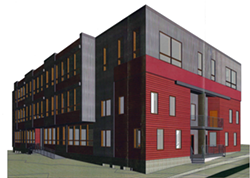 City planner Mary O’Neil may disagree. In a preliminary review, she wrote: “The development does not respect the interspersed historic industrial buildings by way of the proposed demolition of two of them. While the design suggests an industrial design aesthetic giving cursory acknowledgment to the district, its creation sacrifices historic fabric and authenticity.”

“We think we’re going to be doing a good thing for the community by adding more of these reasonably priced studio spaces along with higher-end office space,” said Unsworth.

He’s not worried about finding tenants to fill the space. “The South End is arguably the hottest neighborhood in Burlington,” he said.