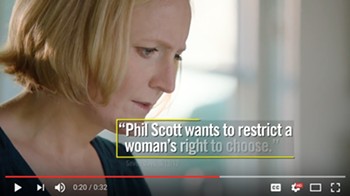 But those top-line numbers only tell half the story. While the DGA has been spending less on its own super PAC, it has been steering large sums of money to one associated with Planned Parenthood.

In the past eight days, the Planned Parenthood Action Fund super PAC has spent nearly $347,000 slamming Scott as favoring restrictions on abortion rights — a charge the Republican contests. According to disclosures filed with the Secretary of State's Office, only $50,000 of that money has come from entities associated with Planned Parenthood. Far more has come from partisan interests.


State records show that the DGA has has dumped $350,000 into the Planned Parenthood super PAC in the past 10 days. Shelburne mega-donor Lisa Steele has also contributed $10,000, as have Burton Snowboards founders Jake and Donna Carpenter of Stowe.

Charyk disputes the notion that his group is serving as a front for DGA dollars, saying, "We've been around for 100 years now and that is not the intent of these ads." His organization is allowed to coordinate with other super PACs, such as Our Vermont, and it can accept donations from the DGA. But it is barred from discussing strategy with the main branch of the DGA, because that organization coordinates directly with the Minter campaign.

Why would the DGA direct its money to another organization's super PAC — not its own? Neither Charyk nor DGA spokesman Jared Leopold would directly answer the question, but one possibility is that Planned Parenthood carries with it a certain amount of institutional credibility — particularly among the women and independents both Minter and Scott are courting.

A Vermont Public Radio poll conducted early this month found that 17 percent of women are undecided in the gubernatorial race, compared to 10 percent of men. Twenty-four percent of independents haven't made up their minds, compared to 13 percent of Democratic-leaning voters and 7 percent of Republican leaners.

A more recent WCAX-TV poll found that only 8 percent of women hadn't made up their minds — and 10 percent of independents.

"The DGA frequently supports different groups who are working to elect Democratic candidates for governor," Leopold says. "In Vermont this year, the DGA has supported both Our Vermont and the Planned Parenthood Action Fund.”

Minter has also benefited from a mail and online advertising campaign sponsored by another super PAC, called the Vermont Conservation Voters Action Fund. That group has spent $145,000 backing the Democratic candidate within the past two weeks.

Scott has also drawn support from one other super PAC, run by the Republican State Leadership Committee. That group, which typically supports legislative and lieutenant gubernatorial candidates, spent more than $12,000 on mail mentioning Scott.

Adding up all the outside spending, pro-Minter super PACs have actually outspent pro-Scott groups in the past two weeks. Those backing the Democrat have spent $637,000 in that period, while those supporting the Republican have spent $593,000.

Corrected at 2:56 p.m.: An earlier version of this story misstated the amount of money the Democratic Governors Association has contributed to the Planned Parenthood Action Fund super PAC. It is $350,000.