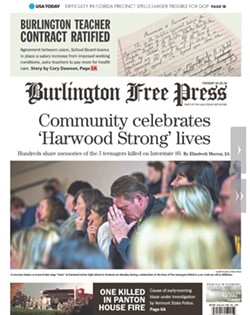 The Burlington Free Press on Tuesday laid off four employees — including three newsroom staffers — in what appears to be part of nationwide downsizing by its corporate parent, Gannett.

Among those let go were features writer Sally Pollak, news reporter Cory Dawson and sports writer Lauren Read, according to multiple people with direct knowledge of the situation. Hours after the news broke Tuesday, the paper acknowledged the layoffs in a story on its website. In addition to the newsroom staffers, it said an employee in the advertising department was cut.

Pollak worked for the Free Press for 25 years, first as a sports writer and most recently as a food writer. She lamented the news on Facebook Tuesday afternoon.

“It was a good run: 25 years covering Vermont,” Pollak wrote. “Thanks to everyone for talking with me for stories and reading my stuff.”

“Today was my last day at the Burlington Free Press. I was honored to cover high school and college sports in Burlington for 4 years,” she wrote. “I am proud of the work that I did and that @bfp_sports did while I was there. I loved my job and everyone in the local sports scene.”

Tuesday’s layoffs follow last Thursday’s news that publisher Al Getler had been replaced by his predecessor, Jim Fogler. A Free Press story announcing that move did not provide a reason for Getler’s unexpected departure. It said that Fogler would split publishing duties between the Poughkeepsie Journal, where he has been working since January, and the Free Press.

Last Friday, Politico’s Ken Doctor reported that Gannett was “on the brink of announcing another downsizing.” He wrote that layoffs could be “significant” — and that they could amount to “as high as 10 percent of newsroom costs at some properties.”

The Free Press has been eviscerated by staff cuts in recent years. According to a staff directory on the paper’s website, Tuesday’s layoffs will reduce the paper’s editorial staff from 21 to 18.

Executive editor Denis Finley declined to comment Tuesday. Fogler did not respond to a request for comment, but he provided a statement to his own newspaper.

“With our momentum toward a next-generation media company this makes it a really tough day for four of our very dedicated and talented people, their families and co-workers,” Fogler said. “These are individuals who have played a major role in our media transformation and our local community and they will be greatly missed.”