Close friends and teachers recounted skiing escapades with Eli Brookens, cracked jokes about Liam Hale’s obsession with cars and described Janie Chase Cozzi as full of “sass.” They shared a story about carrying out a mischievous lawn-mowing job with Cyrus Zschau and praised Mary Harris’ “zest for life.”

The five high school students were killed by a wrong-way driver on their way home from a concert on October 8.

The Harwood Union High School gymnasium was packed Monday night for an event held to honor the teens. Their classmates filled the wooden bleachers, using one another as back rests, and an older crowd occupied the hundreds of folding chairs that had been set up on the gym floor. The stage was a shrine to the students, with poster-size photos and five wooden stars wrapped in strings of lights, propped up by hay bales and potted flowers. 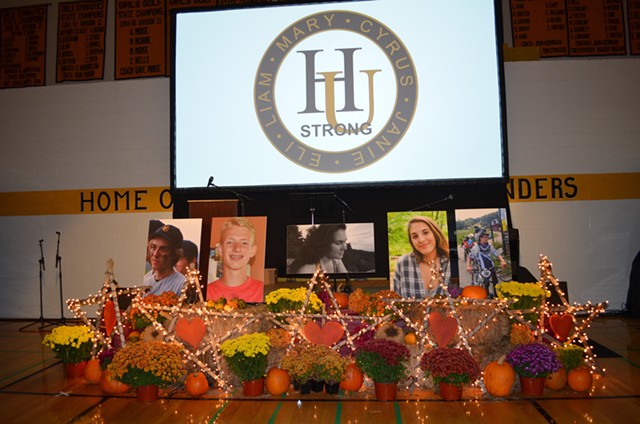 Organized by the Harwood Union junior class, the “celebration of life” included a bagpipe processional, fireworks that would rival a July 4th celebration, and a soulful performance by 2001 Harwood alumnus Grace Potter, who sang her song “Stars.”

Sitting among the families of the students who died were two youthful-looking Williston firefighters — A.J. Leclair and Tony Simanskas. Both men responded to the crash. Harwood coprincipal Lisa Atwood started to ask the crowd to give them a round of applause, and the entire room was standing before she could finish her request. At the end of the night, some of the fallen students’ closest friends walked over, one by one, to shake the firefighters’ hands.

Zinn Wolfe, who befriended Brookens in fourth grade, recalled their adventures on the ski slopes. “I’ll never forget watching him send it big off the cliffs and landing in the waist-deep powder because there was so much passion and skill involved in the way he skied and his talent in skiing really reflected his work ethic.”

Eli Moskowitz also met Brookens — “a tall skinny kid with a gap-toothed grin” — in fourth grade. He described watching his friend wipe out multiple times during one ski competition. But when Moskowitz met him at the bottom of the mountain, he said, “I found Eli smiling and the first thing he said to me was ‘Yo, I got so much snow down my pants.’”

Jonah Ibson, who taught Brookens English, read an essay Brookens had written — from the perspective of a pair of underwear.

Janie Chase Cozzi was “the most tell-it-how-it-is person I’ve ever known,” said her longtime friend, Anna Jarecki. Referring to Cozzi’s two younger brothers, she said, “I’m pretty sure Janie enjoyed babysitting those two more than she enjoyed going out with friends, which is a little odd for a teenager, but family came first for her.”

Jacki McCarty, Cozzi’s eighth grade English teacher, praised her candor and intellect. And, she noted, “She entered eighth grade with a fair amount of sass and a dash of defiance.”

Liam Hale was an opinionated raconteur with an impeccable sense of style and an obsession with mountain biking and nice cars. His close friend Anna Fortier recalled how he would make her listen to the sound of a Lamborghini’s engine. “Then he would say, ‘So good, so good’ with that little head nod he had.”

Kristi McKnight, who taught Hale science during his freshman year, remembered his sweater vests and “perfectly gelled hair swept to the side.” She said the first time she saw him in the hallway this year, he told her, “Kristi, I’m glad to see that you’re dressing halfway decent this year.” McKnight noted, “He’d pick on you but he always did it with love in his heart.”

Eli Hammond grew up with Cyrus Zschau. “I can recall a time when Chris [Zschau’s father] finally let us mow the lawn together … He ended up sitting on my lap and steering. That wasn’t the best decision. Chris and Sarah, I’m sorry for how bad your lawn looked that day, especially the inappropriate shapes we made.”

Adam Sargent, who taught Zschau U.S. history in eighth grade, described his former student as “a thoughtful, quiet leader who worked hard and made those around him better.”

Kathy Cadwell, who taught Mary Harris history last year, said, “Mary had a deep insight into human nature. She had a deep sense of justice and kindness.” She asked the audience to “Raise your hand if you know about YOLO.”  Most students complied, and, more tentatively, so did some parents. Cadwell continued, “You Only Live Once. This was Mary’s motto. She lived it to the fullest.”

Lauryn Green met Harris in preschool. “Mary was the friendliest, sweetest, most intelligent and outgoing person I have ever met.” And, Green noted, “There was never a dull moment with her.”

Green was at the Higher Ground concert with Harris and her friends on the night of the crash.

“Everyone knows that Saturday night the five of them spent their last night at the Mike Stud concert. That whole week leading up to the concert Mary and I …obsessed over our favorite songs and talked about what we were going to wear,” Green said. “I just want to let everyone know that I don’t think they could have had a better night. They danced the night away, sang their hearts out and I know they were all very, very happy.”