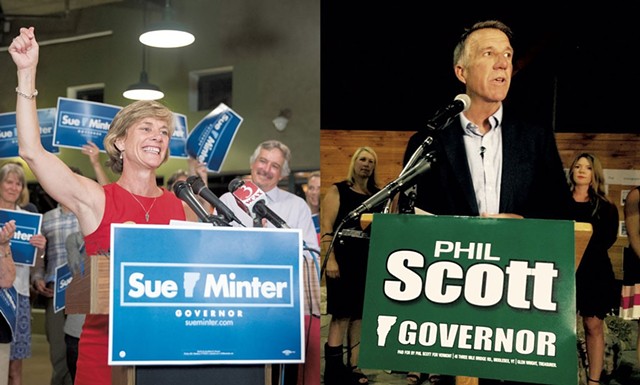 Conducted by Braun Research of Princeton, N.J., the live-caller poll surveyed 603 likely voters, using a mix of landlines and cell phones. Its margin of error was plus or minus 4 percent, meaning the race could be essentially tied — or Scott could have an even wider lead.

That's a significantly smaller percentage than Castleton Polling Institute found in a recent survey it conducted for Vermont Public Radio. In that poll, 14 percent said they were undecided. Thirty-nine percent told VPR they supported Scott, 38 percent Minter and 2 percent Lee. That poll's margin of error was 3.9 percent.

It's not necessarily safe to assume that the differing results in the two polls represent a shift in the race, because the surveys were conducted by different firms and may employ different methodology. WCAX did not provide a breakdown of how the candidates' support varied by age, gender, region or party affiliation. It only said that Scott was viewed favorably by more Vermonters (68.6 percent) than Minter (53 percent).