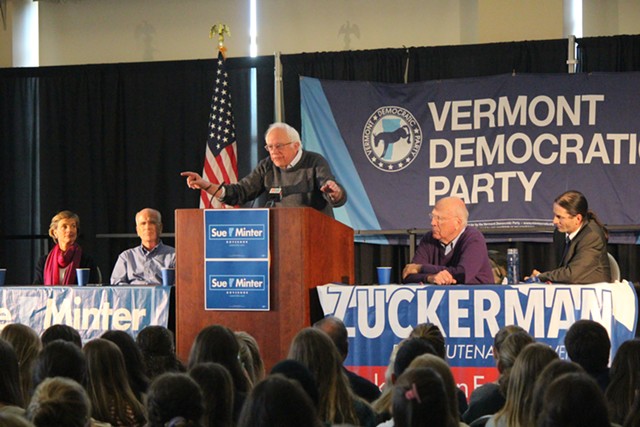 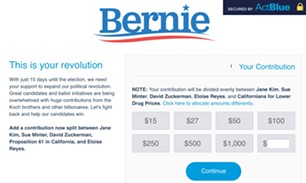 By 8:30 p.m. Monday — six hours after Sanders sent the email — Zuckerman had already raised roughly $20,000 from 2,800 donors, he told Seven Days. Minter's campaign declined to comment on its haul but issued a statement thanking Sanders for his support.

"We're excited to have Bernie Sanders highlighting Sue as a candidate who shares his values, who will strengthen the middle-class and truly tackle Vermont's affordability issues, rather than simply rehashing trickle-down economics and the national Republican line," said Minter spokesman Elliott Bent.*

Sanders has not previously raised money for Minter or Zuckerman, but he has proved to be an extraordinarily powerful fundraiser. Last May, a single email to the former presidential candidate's list netted Rep. Chris Pearson's (P-Burlington) Vermont Senate campaign $60,000 within three days and, eventually, more than $80,000. That was more than enough to fund Pearson's entire campaign. Last week, Sanders raised more than $2 million within three days for various congressional candidates.

In Monday's email, Sanders described his fellow Vermonters like this:

In my home state of Vermont, Sue Minter is the Democratic nominee for Governor. She will be a strong leader in making higher education tuition free for all, and in the struggle against climate change. But a new poll shows she is one point behind the Republican nominee, who is receiving strong support from billionaires around the country. In my view her running-mate David Zuckerman, a family farmer and food activist, will be the most progressive Lieutenant Governor in the country. He is an outstanding member of the state senate who has taken on powerful special interests throughout his career.