At UVM Roundtable, Biden Calls for Renewed Focus on Cancer Research | Off Message

During a morning roundtable at the University of Vermont, Biden said that researchers had in recent years reached “a real inflection point” in the fight against the disease. But he argued that the medical community continued to face structural deficiencies that hobble communication and collaboration.

“We are so far behind the curve on some of the simple things that can make a gigantic difference,” the vice president said. “This is a worldwide problem, and we need an organizational structure that will take us to a different place.”

Specifically, Biden said, those fighting cancer struggle to access information about their malady, find clinical trials or even share their medical records with far-flung hospitals. Moreover, he argued, the pharmaceutical industry charges too much for life-saving drugs.

“Here’s the deal: We have to have a major conversation with the drug companies about pricing,” he said, adding that there was “no justification” for drug regimens that cost into the six-figures.

Biden approached the subject from a personal perspective. His eldest son, Beau, died of brain cancer in May 2015 at age 46. The vice president described meeting other families in his son’s hospital ward and hearing their pleas for “one more month,” so that they could attend a child’s graduation or wedding. He expressed confidence that if the nation simply reorganized the way it approached cancer research and treatment, it could provide patients that “one more month.” 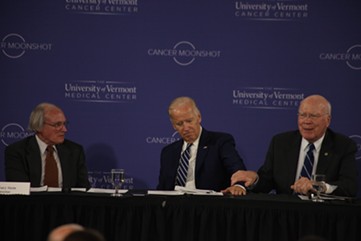 Biden’s public quest to fight the disease began nearly a year ago, when he announced in a Rose Garden speech that he would not seek the Democratic presidential nomination. He expressed regret then that he would not be the president who saw the battle against cancer to its conclusion. Three months later, during Obama’s final State of the Union address, the president charged Biden with leading the “Cancer Moonshot,” a multiagency task force with the mission of making a decade’s worth of progress in the field in five years. The task force submitted its final report to the president on Monday.

One cause for optimism, Biden said, was that cancer research remained “the only bipartisan thing left in American politics.” He called on Congress to invest all the resources it would take to “defeat this damn disease.”

“Let’s all make an agreement to be unwilling to postpone for another day what we know we can do,” he said. 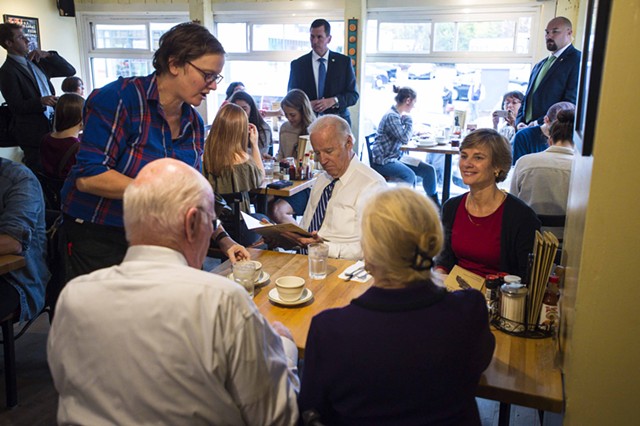 Sen. Patrick Leahy (D-Vt.), who hosted the vice president and sat beside him at the roundtable, pledged to Biden that “this year and the year after and the year after,” he would use his perch on the Senate Appropriations Committee to “keep that money coming.”

The senator also described his own brushes with the disease.

“It is deeply personal in my family. Marcelle is a cancer survivor,” he said, referring to his wife, Marcelle Leahy. “She has become a strong advocate for cancer prevention. Two months ago, I lost my older brother that way.”

But even though the event was billed as a roundtable, only a handful of the participants had the chance to utter a word. Biden and Leahy arrived an hour after it was scheduled to begin — and though the vice president promised to “be brief,” he proceeded to speak for 50 minutes. Soon after he concluded, he said he had to run to catch his plane.

The vice president ordered a stack of blueberry pancakes and then worked the room with Minter in tow. The two walked arm in arm on their way out of the restaurant 50 minutes later. Biden paused just outside to pick up a nickel and dime he spotted on the ground. He held up the change and said it was a “donation.” The beneficiary of the donation was not clear.