Media Note: Getler Out, Fogler In at Burlington Free Press | Off Message

Media Note: Getler Out, Fogler In at Burlington Free Press 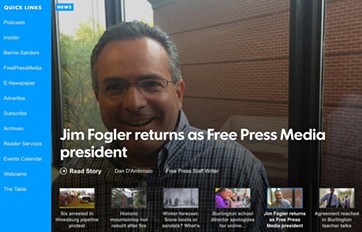 After 22 months on the job, Burlington Free Press publisher Al Getler has been replaced by his predecessor, the newspaper announced Thursday. The Gannett-owned daily provided no explanation for Getler’s departure. He declined to comment.

Returning to the paper’s top job is Jim Fogler, who served as publisher for four years before leaving in September 2014 to become vice president of business development at Party City. Fogler returned to journalism — and Gannett — in January, when he took a job as publisher of the Poughkeepsie Journal.

According to the Free Press story announcing the transition, Fogler will now publish both papers. Even after he took the job in Poughkeepsie, the story said, he continued to commute between the two regions, because his family remained in South Burlington.

“I’m excited to be back, and I look forward to reconnecting with the community as well as the team here,” Fogler told the Free Press’ Dan D’Ambrosio. “My plan is to split my time evenly between the two sites.”

In a separate story published Thursday in the Journal, Fogler made clear he was not leaving Dutchess County, N.Y.

“I’m here to stay,” he told that paper. “This is an exciting opportunity as my role expands to a more regional level. I’m truly getting the best of both worlds since I’ve been back in my hometown at the Journal, and now I’m also back to a place, Burlington, I’ve called home for six years. We’ll continue to provide our local communities with the quality journalism they expect as we evolve and grow as digital-media organizations.”