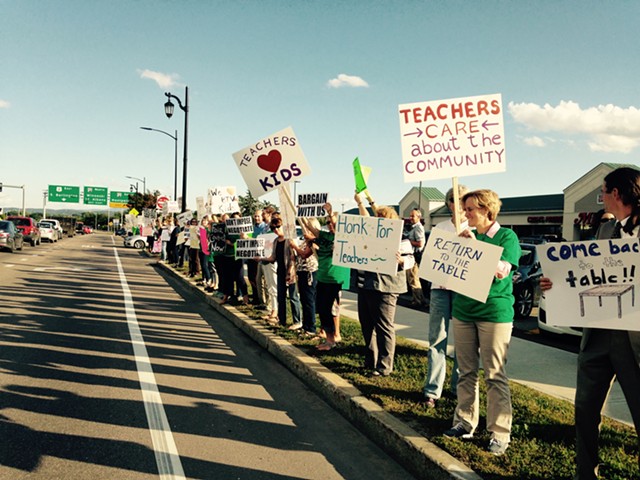 With a possible strike looming Thursday, the Burlington Education Association and the city school board were in a daylong, last-ditch negotiating session that extended into the evening.

Talks began early Wednesday at the Burlington School District central office on Colchester Avenue, and federal mediator Ira Lobel spent the day going back and forth between the teachers and the school board hoping to bring them together — without immediate success. There was still no resolution as of 5 p.m. Wednesday.

Superintendent of Schools Yaw Obeng said late in the afternoon that schools were “absolutely” still scheduled to open Thursday. Teachers have vowed to strike Thursday morning if no contract deal is reached.

The conflict over pay and benefits has dragged on for more than a year. In September, the school board imposed employment terms that gave teachers an average raise of around 2.75 percent but cut certain perks and increased teachers’ share of health insurance costs.

Teachers saw the board’s move as a power play. They responded with pickets, claims that the board was trying to bust the union, and a vote authorizing a strike Thursday, pending the outcome of Wednesday’s meeting.

Under the terms imposed in September, steps on the salary grid range from $43,565 to $84,750 annually. Effective January 1, 2017, teacher contributions to health insurance will increase from 15 to 16 percent.

The union had also sought to preserve a clause from the three-year contract that expired in August guaranteeing them a salary in the “middle of the middle” compared to other teacher pay in the region.

The board axed that language, saying it was unfairly restrictive.

The imposed terms also reduce a benefit that allowed teachers to accumulate unused sick leave and get payouts for it at the end of their careers. New teachers will not be eligible for the payments.