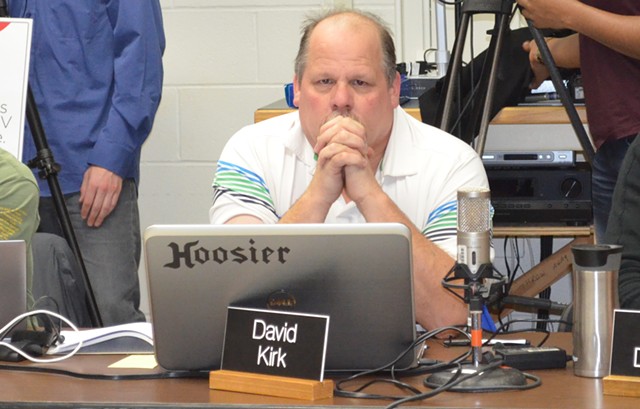 Burlington School Board member David Kirk is drawing the ire of some parents who say his Facebook posts are racially insensitive, degrading to women and demeaning to students.

Kirk, who represents Ward 7 in the city's New North End, should resign, said parent Alison Segar, in a post on the Support Our Burlington Schools Facebook page.

"I have just looked at his Facebook page which spews forth hatred towards many of the groups of people represented in our school district. I think we should be calling for his resignation," Segar wrote. "I am embarrassed that he is a representative on our board and that he is part of the decision making process. UGH."

In a telephone interview with Seven Days, Segar said she wanted to hear what Kirk had to say about the page. But she also vowed to bring to the school board her request that he resign. "I will certainly make my feelings known at the next school board meeting that I can attend," Segar said.

Kirk did not immediately respond Tuesday to a request for comment.

Kirk's Facebook posts defend the Confederate flag, suggest immigrant students ask schools to make too many changes for them, and poke fun at the Black Lives Matter movement. Kirk's term runs through 2018. As of Tuesday evening, his Facebook page was publicly accessible.

Many of the posts on his page are shared from websites such as Just a Southern Thang, Right Wing News and, in the case of a post featuring a woman tied up in her underwear, I Love Golfing.

Some posts go back several years; others are more recent. On Monday, for example, Kirk shared a RudeFunny.com post that declared, "If I was a teacher, I would staple Burger King applications on failed tests."

Some of the criticism about Kirk's posts circulated among teacher union members who said they did not want to be quoted by name in Seven Days. The union and the school board are in the midst of heated labor negotiations, with a mediation session set for Wednesday and possible strike looming Thursday.

Here is a sampling of Kirk's posts: