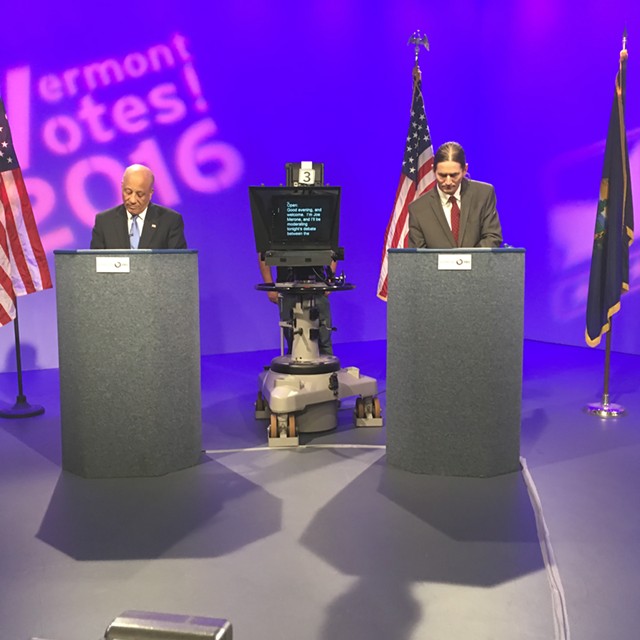 Through five campaigns — for state auditor, governor and state senator — race was never an election issue for Republican Randy Brock, who is African American. But it keeps resurfacing as he competes for lieutenant governor with Progressive/Democrat David Zuckerman, who is white.

Sparring between the two over racial sensitivities escalated Thursday night during a debate on Vermont PBS.

Brock accused Zuckerman of making a series of “derogatory” and “offensive” racial comments. In particular, he pointed to a comment made earlier in the campaign in which the ponytailed Zuckerman mentioned that stereotypes over a person’s race or hair length are worrisome.

Brock also took issue with a comment Zuckerman made at a forum last week when advocating for the legalization of marijuana. “Sen. Zuckerman said, ‘I want to talk about the underground marijuana market. I can’t call it the black market for obvious reasons,’” Brock said. “What could something like that mean other than a racial innuendo?”

Brock zeroed in on another comment Zuckerman made at a debate in Tunbridge. “He makes a joke in reference to his financial acumen being based on having a Jewish father,” Brock said. “A person can misspeak once, but when you have a pattern of that is indicative of a problem.”

Zuckerman countered, accusing Brock of working from a right-wing playbook. “I have not made racial charges or attacks on anyone,” he said.

“When I talked about stereotyping people, I said we all have to look at our internal biases,” Zuckerman said. “I never compared the ramifications of somebody judging someone for long hair with the way that our law enforcement judges African Americans and people of brown skin.”

Zuckerman said he’s long talked about ending the use of the term “black market” because it perpetuates a negative stereotype.

Later in the 90-minute debate, when a Johnson State College student asked the candidates how they would make college more affordable, Zuckerman said part of the solution is to spend less money on incarcerating people and more on higher education.

“In Vermont … we have rates that are 6.9 percent above the national average in proportion of African Americans in prison versus white folks in prison, often due to unjust racial prejudice and profiling,” Zuckerman said.

Brock dismissed Zuckerman’s numbers — and his point. “When you look at statistics quoted by politicians, you should always remember that 87.5 percent of those statistics were made up on the spot,” he quipped.

Brock questioned whether anyone’s looked at why more blacks are in prison, asking if there is “a difference between the incarceration rates between people of color who are born and grew up in Vermont as opposed to people who come here from areas that have high crime historically.”

The statement was surprising given that Brock moved to Vermont from Philadelphia to attend Middlebury College in the 1970s.

Zuckerman suggested that Brock was treading on thin ice. “I think we need to be very careful about comments like what my opponent just made,” Zuckerman said. “To say that somehow folks of color that might be coming into the community may be of higher risk than those that are born here is exactly the kind of language that is going to reduce the interest of people coming to Vermont.”

Brock didn’t let up. “To rush to a conclusion that there’s major discrimination going on without probing the reasons why … gives you a very superficial view and you wind up solving the wrong problem, and that’s my concern.”