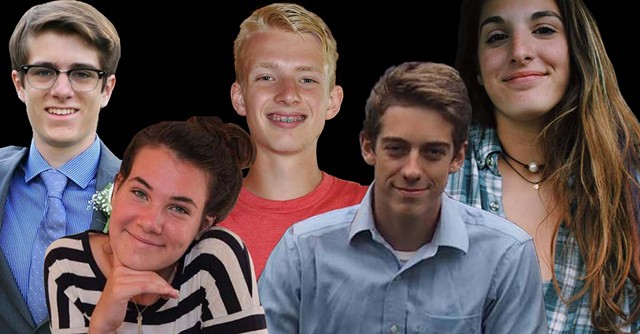 Updated 6:30 p.m. on October 10, 2016 with additional information from the police affidavit.

The man suspected of driving a pickup truck north in the southbound lanes of Interstate 89 on Saturday night and colliding with a car — killing five teens — had sought medical treatment that same day, a prosecutor said Monday.

Police have charged Steven Bourgoin, 36, of Williston, with driving off in a police car that responded to the crash scene, but have not charged him as the driver who struck the teens. Authorities stressed that a homicide investigation was ongoing.

Bourgoin had sought “some sort of medical treatment” from the University of Vermont Medical Center Saturday, Chittenden County State’s Attorney T.J. Donovan said during a press conference. According to Donovan, the hospital contacted the Howard Center, a mental health provider, “but Mr. Bourgoin was not seen by the UVM medical staff or the Howard Center staff on that Saturday.”

A police officer’s affidavit said that the center was “called but did not screen” Bourgoin and that he was “seen” by a physician’s assistant, adding nothing further.

Late Saturday, callers reported a pickup truck headed north in the southbound lanes of the highway in Bolton, and then a crash in Williston. A Williston officer responded and found a car in flames. As the officer pulled somebody from the wreck and tried to extinguish the fire, authorities allege, Bourgoin took off in the officer’s vehicle.

After heading south and encountering a police car in wait, authorities say, he turned around and came hurtling back at high speed against traffic toward the crash scene, causing several more collisions. He was hospitalized with injuries and remained in critical condition on Monday.

Donovan announced Monday that his office obtained an arrest warrant for Bourgoin, who will be charged with grossly negligent operation of a vehicle — the police car — and aggravated operation without the owner’s consent. Bail has been set at $1 million.

Donovan said Bourgoin is also the primary suspect in an active homicide investigation into the deaths of the teenagers.

Asked why his office hadn’t yet charged Bourgoin with homicide, Donovan responded, “We want to make sure that this investigation is done in a thorough manner and that we answer all our questions before filing that charge.”

However, an affidavit filed in court by Vermont State Police Det. Sgt. Benjamin Katz states that Bourgoin was driving the pickup truck that crashed into the teenagers’ car.

Killed were Liam Hale and Janie Cozzi of Fayston; Mary Harris and Cyrus Zschau of Moretown; and Eli Brookens of Waterbury.

At the press conference, when answering a question about Bourgoin’s mental state, Donovan revealed that he had sought medical treatment .

UVM Medical Center and the Howard Center both declined to comment.

Bourgoin has a criminal record, including a DUI charge in New York in 2002 and another incident in Massachusetts in 2014, the prosecutor said. In Chittenden County Superior Court, he had been charged with domestic assault for an incident that occurred last May. The jury draw for that case is scheduled for November. VTDigger.org reported that prosecutors in that case are seeking to up his bail to $250,000 in light of the crash.

Donovan also noted that in September, the court granted custody of Bourgoin’s 2-year-old child to his ex-girlfriend. The truck that crashed was registered to her father. According to the Katz’s affidavit, that man told police that he’d cosigned for the vehicle, but it belonged to Bourgoin.

The affidavit also describes a statement from Bourgoin’s ex-girlfriend describing the May incident. According to her account, Bourgoin hit her, told her to take their daughter and leave and then, as she tried to leave, jumped into her vehicle and began driving erratically through Essex, Williston and South Burlington.

He threatened to drive into a pond, she said. She also told police: “When he gets in his moods, he does not think clearly, and has no regard for those around him, even loved ones. When Steven is in these moods, it is usually because he ran out of marijuana which he used to stabilize his mood swings.”

Donovan said his office is awaiting the results of a toxicology report to determine whether Bourgoin was under the influence of drugs or alcohol, but he said, “at this time there is no evidence to suggest that alcohol was involved.”

Bourgoin, still in the UVM Medical Center, was unconscious, so the arrest warrant has not yet been formally served, Donovan said.

Calling the incident an “unspeakable tragedy,” Donovan said the case is his office’s top priority.