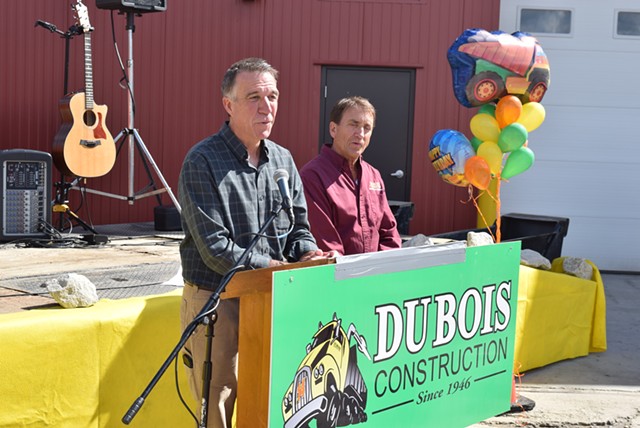 Last Saturday, when Lt. Gov. Phil Scott announced he would sell his share of the excavation business he co-owns if he is elected governor in November, the Democratic Party was clear.

The Republican candidate’s decision fulfilled one of the two options that would resolve any perceived conflict of interest over state contracts DuBois Construction bids on, said Christina Amestoy, the party’s spokeswoman.

Since then, however, Minter has moved the goal posts, urging more stringent standards for what counts as conflict of interest.

On Wednesday, Minter said she thinks DuBois still can’t do business with the state if Scott is governor. Scott’s cousin, Don DuBois, would remain a co-owner of the Middlesex-based company.

“I don’t think it’s appropriate for the governor to be able to award state contracts to themselves or their family members,” Minter said Wednesday in an interview with Seven Days. 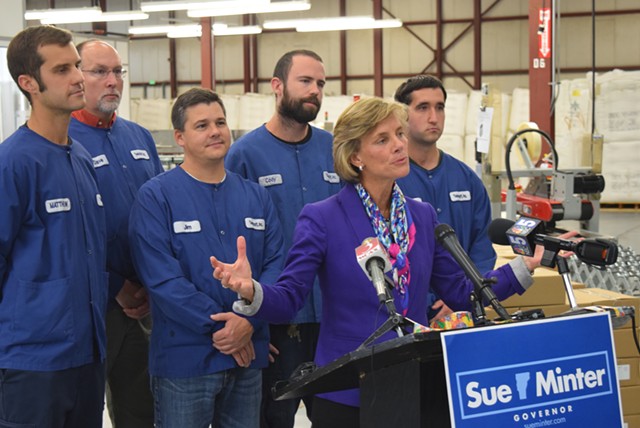 She said she didn’t know where the line should be drawn about who qualifies as a family member too close to do business with, or whether the rule would include close associates outside the family.

Wednesday night, the issue arose during a debate between Scott and Minter in Rutland. The two are competing in the November election to replace retiring Democratic Gov. Peter Shumlin.

“I think that this is something that would not be allowed, frankly, when we had clear rules of procedure and conflict of interest,” Minter said at the debate, arguing that the state needs new rules governing such issues.

“I like Sue’s optimism. She’s looking ahead and I think that that’s great that she thinks possibly I will be the next governor,” Scott retorted. “I think what happened is they had grandiose plans about making this the issue of this campaign and trying to tear down my credibility.”

Scott argued that in Minter’s seven months as Agency of Transportation secretary, she didn’t publicly question contracts DuBois Construction had with her agency for work such as installing culverts. “I was very transparent about this. Everyone knew I was in business,” Scott said.

Minter countered that she did go to an assistant attorney general with concerns about signing a contract with DuBois. She was told it was legal and that if she didn’t sign the contract, she would be putting the agency at risk.

“This is why I have said … that it is time for Vermont to have clear rules of ethics,” Minter said.

Scott turned the tables. Minter’s party has held the majority in the legislature for all of his 16 years in public office, he said. “They can’t pass an ethics reform bill?” he said. "Don’t blame me. I think it’s someone else.”