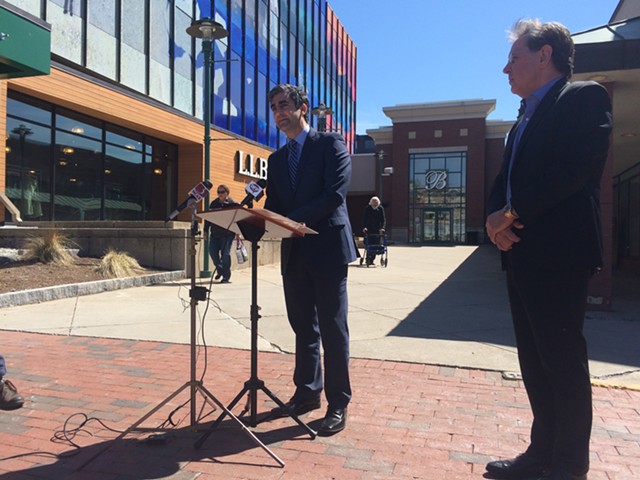 While the rest of the nation watched the first Clinton/Trump presidential debate, the Burlington City Council talked tax-increment financing.

The council voted 9-1 Monday night to put a $21.8 million TIF proposal on the November ballot. If residents approve the measure, the money will be used to restore St. Paul and Pine Streets, which are currently cut off by the Burlington Town Center, and to upgrade nearby public infrastructure — all part of a massive downtown mall redevelopment project.

TIF is a funding mechanism that allows municipalities to pay for public infrastructure improvements that encourage new public or private development. The upgrades are financed with debt that gets repaid by the future growth in property tax revenue from the developments.

The lone 'no' vote came from Progressive Max Tracy, who said the city was still working with incomplete information. He also objected to plans to pay mall owner Don Sinex for the full value of the streets’ right-of-ways, estimated at $1.9 million, suggesting the city could strike a better bargain.

Ahead of the vote, the council reviewed a feasibility report from a Norwich firm called Doug Kennedy Advisors that concluded the Burlington Town Center redevelopment is financially viable. Sinex had commissioned the report at the city’s request. Parts of it — including anticipated lease and rent rates — are not being released to the public.

The city also hired its own firm, ECONorthwest, to review the report. It came to the same conclusion but suggested the report could have provided more information about the financing of the project and also could have better examined how competing commercial and residential developments might affect the project.

Mayor Miro Weinberger emphasized the safeguards included in the city’s predevelopment agreement with Sinex. The developer has agreed to pay up front for the public improvements, with the city reimbursing him after construction is complete. Additionally, the city won’t issue bonds to start paying him back until the Burlington Town Center has created enough new property tax revenue to pay for the debt service.

Earlier that day, opponents to the project gathered in front of the mall and released balloons to show the height of two fourteen-story towers Sinex wants to build. A lime green balloon floated in the back of Contois Auditorium during the council meeting — a remnant from the demonstration.