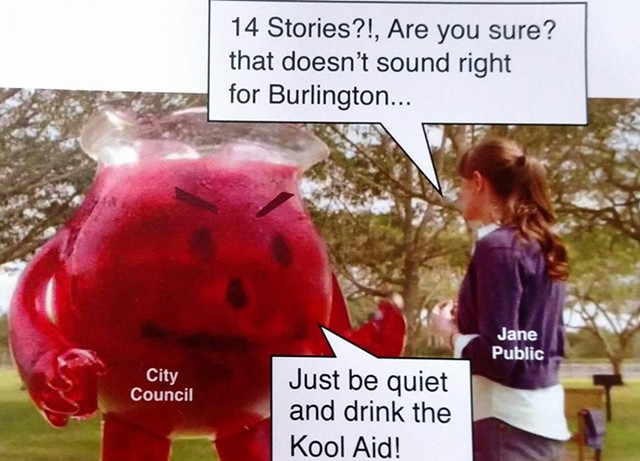 This drink goes down anything but easy.

An unknown artist created a series of at least four satirical postcards using old Kool-Aid ads to mock Burlington Mayor Miro Weinberger and city councilors who are in favor of a zoning amendment that will allow developer Don Sinex to build up to 14 stories high.


“An appreciative City Council says … ‘Mayor knows best,’” reads the riff on a vintage advertisement. The original shows a family paying tribute to Mom, whose head in the edited version has been replaced by Weinberger’s. It reads: “He keeps Kool-Aid in the ice box by the pitcher full — and they’re drinking it!”


The altered ads were distributed at the South End Art Hop last weekend and were posted Sunday on the Facebook page belonging to the Stop the 14-Story Mall group. The post came one day before the council passed by a 7-4 vote the amendment that will allow the Burlington Town Center redevelopment to go forward. A public hearing and final vote on the proposal is scheduled for September 29.


“They were at Art Hop, but I don’t know who did it,” said Caryn Long, a member of the Coalition for a Livable City group, which has long opposed the Sinex proposal. “It wasn’t the coalition. I saw them; I thought they were cool and funny.”

Genese Grill, another Coalition for a Livable City member, told Seven Days by email that someone anonymously dropped off the artwork outside the door of the 8 Space Studio Collective on Howard Street.


The artistic expression, though, didn’t sit well with City Councilor Joan Shannon, who decried on Facebook the “baseless ridicule” of “people who step up to serve the City.”

Shannon, who supported the proposal at Monday’s meeting, is portrayed in one of the ads as a child, a bow in her hair, raising a glass of Kool-Aid toward “Mother” — Weinberger.


“That’s not a recipe for encouraging people to serve,” she wrote on Facebook in reply to the images. “That said, I do like my bow.”

In a phone call Thursday, Shannon admitted the images are pretty funny, but she stuck by her concern that such attacks could dissuade people from running for local political office.


“I don’t want Burlington politics to go the way national politics has gone — making a mockery of it,” she said. “That was my only concern.”

Weinberger was not a fan of the artwork. “I believe strongly in democratic debate,” he said in a statement emailed to Seven Days. “I don’t believe that the debate should devolve into misinformation and offensive personal attacks.”

Weinberger went on to decry an image of him pouring Kool-Aid into a glass held by the city council president. “I am particularly disappointed by this poster, which questions the motivations and character of one of our best public servants. Anyone who thinks the City Council president is blindly following my plan without good reason does not know Jane Knodell, and is ignoring her thoughtful work on this issue.”

Art Hop featured another redevelopment protest when members of the Coalition for a Livable City released a two-minute video, projected on the side of a South End building, that slammed the Sinex proposal and encouraged residents to demand a public referendum on the project.

“City Hall is pushing spot zoning,” the video warned, “bowing to Sinex’s demands. This whole process was rushed, and dissent was crushed. Without your help, we will lose our town.” 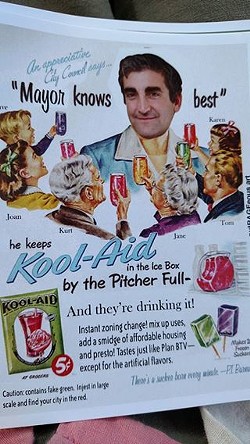 The Art Hop political protest pieces were in the same vein as those displayed at last year’s event, when a group of artists erected “Miroville,” a faux housing development and advertisement that mocked Weinberger’s proposal to allow new housing in the Pine Street Enterprise Zone. The group worried the proposal would gentrify the South End and force artists out of the area.


As the artistic display went up, Weinberger changed course and pulled his support of the housing plan.

The mayor’s office told Seven Days that the art installation was not directly responsible for Weinberger’s change of heart, which came after months of public objection to the housing plan.

Updated, September 16, 2016 to add the statement from the mayor’s office and clarify timing of Weinberger’s decision on South End housing.