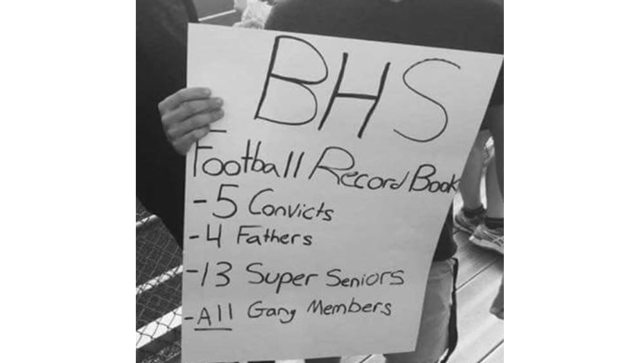 Fight participants hurled racial slurs along with punches during a brawl behind the bleachers. And in a separate incident, a Rice Memorial High School student brought a sign to the game that characterized Burlington players as convicts and gang members.

The incidents were not connected, according to Burlington police. No charges are expected in the sign incident and the fight remains under investigation, Deputy Chief Shawn Burke told Seven Days Thursday.

Images of the sign have been shared widely on Snapchat and Facebook. Many parents and students saw it as a racist slap at the BHS team.

The Rice student carried the poster into the bleachers at Burlington’s Buck Hard Field. It started with the headline “BHS Football Record Book,” and then listed, roster-style: “-5 Convicts, -4 Fathers, -13 Super Seniors, -All Gang Members.”

A Rice school employee saw the sign and told the student to put it away. He complied, but not before other people snapped pictures, which then went viral on social media.

“It was deplorable. It was full of bias and racism and it was very hurtful,” said Kevin Garrison, an African American parent whose son, also named Kevin Garrison, is a junior on the BHS varsity team. The younger Garrison scored four touchdowns, helping propel the Seahorses to victory in Friday’s game.

At a minimum, Rice should write a formal apology to the Burlington High School football team, Garrison said.

“I’m hoping we can learn from it and move on. But certainly something has to be done about it,” he said.

The student at Rice is being disciplined, according to Sister Laura Della Santa, principal of the South Burlington Roman Catholic high school, which has a long-standing sports rivalry with BHS.

The sign was unacceptable, inappropriate and unkind, she told Seven Days: “It’s not what we stand for or what the students stand for.”

The school also released a statement apologizing to the Burlington community.
Rice administrators plan to meet with Burlington school officials to forge a plan to foster education and a broader apology.

Della Santa declined to identify the student who held the sign, or describe exactly what discipline he faced.

Obeng, the Burlington schools superintendent, thanked all involved for “working to address this incident in a timely manner.”

“The Burlington Police Department acted quickly to identify the students involved, determine the origins of the online post and deploy a school resource officer to investigate the situation and calm tensions,” he said in a statement. “The chief of police has noted that the sign was ‘deplorable’ and ‘reeks of racism.’ The incident has not been deemed a hate crime.”

The statement went on to say that Obeng and Rice administrators are working to “bring together those involved in the incident in order to repair harm and restore relationships.”

Meanwhile, the police are investigating a separate and unrelated incident that also took place at the game that night. According to Burke, a fight broke out behind the bleachers between a white family and a group of middle school students, most of whom are black.

The two groups have had ongoing friction in their Old North End neighborhood which boiled over at the game, Burke said. Racial epithets were used during the fight, Burke said. Police were called but the brawl was over by the time they arrived.

No one was seriously injured. A teenage bystander who tried to break up the altercation was struck, as were other fight participants, according to Burke. Police are studying a shadowy video of the brawl to see if charges are warranted. So far, a 13-year-old middle school student has been referred to juvenile court, according to Burke.

The racial aspect is part of the investigation, he added.

“There certainly is a racial undertone to this in the sense that we have statements indicating that there were some racial epithets either used directly afterwards of the fight, or leading up to it,” Burke said.

The racial tensions come just weeks after the Burlington school board passed a resolution to work on the racial climate in city schools, prompted by three African American school district administrators complaining of discrimination and harassment on the job.