Minter Gets to Talk Plenty as She Debates an Empty Chair 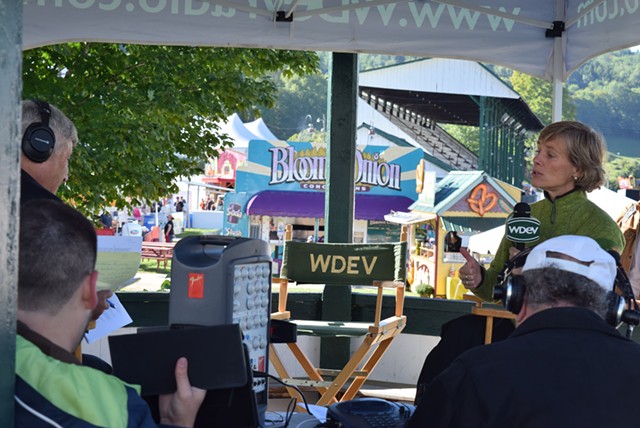 For a gimmick, the shtick was good for about a minute. Democratic gubernatorial candidate Sue Minter sat Thursday morning next to an empty chair across the Tunbridge World’s Fair gazebo from Mike Smith, host of WDEV radio’s “Open Mike” talk show.

Then the gubernatorial debate got a tad tedious.

“We invited [Republican candidate] Phil Scott, but he put conditions on the debate which we rejected, so Phil Scott is not here,” Smith explained to his audience. “My role as moderator is to ask the questions and seek clarifications when needed … It is not my responsibility to challenge the opponent.”

Scott declined to take part in debates unless all the candidates on the ballot were invited. Smith refused to invite Liberty Union candidate Bill Lee, the retired Boston Red Sox pitcher who is running a not-entirely-serious campaign.

A debate featuring the candidates for lieutenant governor, Republican Randy Brock and Sen. David Zuckerman (P/D-Chittenden), took on a more traditional flavor. Liberty Union candidate Boots Wardinski was not invited and neither of the other candidates objected.

Scott has agreed to 11 debates that either include Lee or were scheduled before he set the conditions following the August primary.

“This is my show now,” said Smith, who took over WDEV’s morning talk show last year. “Bill Lee … would occupy 30 percent of the time in the debate. He’s going to get 10 percent of the vote.”

Instead, Smith gave Minter 100 percent of the time, which meant she had three minutes to answer each question during the hour-long debate. Three minutes is a gaping amount of time on radio.

Smith asked Minter what she would do with the troubled Vermont Health Connect insurance exchange that retiring Democratic Gov. Peter Shumlin launched. “My goal will be to make this exchange functional,” Minter said as part of her three-minute answer.

She didn’t say how and Smith never asked her to explain.

As Minter gave her closing statement, three minutes stretched on so long that at one point she looked up at Smith, saw that she had more time, took a deep breath and plunged back into her monologue.

Minter used the debate to hint at a new agriculture policy that she released later Thursday. Her plans include offering loans to farms to convert from traditional to organic.

Finley, of South Strafford, volunteered as an office manager for Dunne. “I thought Matt was the best candidate to beat Phil Scott,” she said. “I don’t think that Minter can.”

Finley, who said she leans socialist, added that she wished Scott had been at the debate so she could see whether Minter could hold her own. What she heard from Minter alone didn’t impress. “I wish she were stronger,” she said. “When I listen to her, I just don’t feel a strong leader.”

Scott avoided what might have been for him one of the friendliest settings of all the debates. Smith is a former Republican state official, and the debate was held in the relatively conservative rural farm territory of Orange County.

“This would have been the one that makes a lot of sense,” Scott’s campaign coordinator, Brittney Wilson, conceded Wednesday. But she said the campaign had to set parameters after receiving dozens of debate requests.

Scott spent Thursday morning at a press conference 80 miles away in Colchester, talking about his economic development plans.