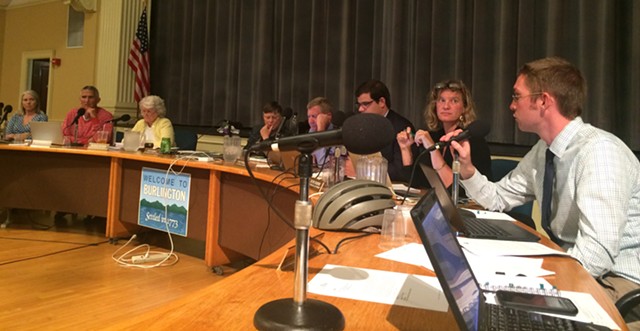 The Burlington Town Center redevelopment cleared another hurdle Monday night when the city council voted to approve a zoning amendment that will allow developer Don Sinex to build up to 14 stories high.

In a 7-4 vote, the council decided to increase the maximum building height permitted on the site of Burlington Town Center from 105 feet to 160 feet. The height limit applies to a new zoning “overlay” district that also includes several surrounding properties such as the College Street and Lakeview parking garages.

The height change has been a major source of contention, with opponents arguing that it’s too tall and that the city shouldn’t change its zoning to cater to one developer’s project.

Councilors Sharon Bushor (I-Ward 1) and Max Tracy (P-Ward 2), with support from Selene Colburn (P-East District) and Sara Giannoni (P-Ward 3), made a number of attempts to reduce the maximum height and scale back the size of the district. After seven other councilors quashed their many amendments, those four councilors ultimately voted against the new district. (Councilor Chip Mason, the Ward 5 Democrat whose law firm is involved with the redevelopment, has recused himself from votes related to the project.)

“The height and the massing are incompatible with what I love about Burlington,” said Bushor. Tracy called the zoning change process a “charade,” suggesting proponents weren’t open to compromise.

Councilor Kurt Wright (R-Ward 4), who spoke at length in support of the zoning change and the mall project, said: “In order for Burlington to grow, we really don’t have a lot of land to grow out, so I think we need to have some room to grow up.”

In creating a new overlay district, the councilors made a number of other changes to the zoning in that area, including requiring buildings to be constructed to the LEED Gold standard, meeting certain environmental requirements.

In total, the council considered 25 amendments from various members during a meeting that lasted about four hours.

Council President Jane Knodell (P-Central District) noted that Monday’s public forum marked the 10th public meeting on the downtown overlay district. There will be at least one more: The council must hold a public meeting on the zoning changes, scheduled for September 29, before taking a final vote.