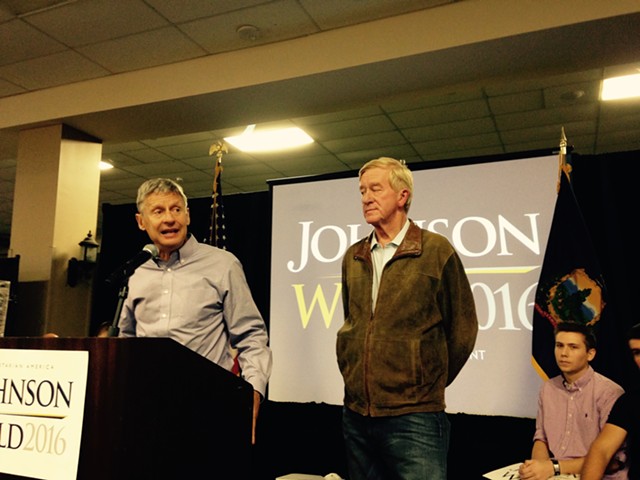 So said Libertarian presidential hopeful Gary Johnson on a campaign swing through South Burlington Wednesday night with running mate William Weld by his side.

The two former Republican governors, both converts to the Libertarian Party, wore blue jeans and relaxed expressions as they pledged to fight tax increases, simplify the tax codes and make government better by making large portions of it disappear.

"Count on us to reduce taxes every single time," Johnson said. "Count on us because we get to run the administration of the federal government, that rules and regulations are going to get better, not worse."

A few hundred people waved signs proclaiming, "Our Best America Yet. You In?" and cheered loudly at the Sheraton Burlington Hotel & Conference Center as Johnson essentially proposed to put government on a starvation diet in order to fatten the wallets of ordinary people.

Hoots of support and loud clapping broke out when Johnson explained that he would replace income and corporate taxes with a consumption tax that he said would free up seed money and lead to millions of new jobs.

The government should nurture entrepreneurship and take advantage of innovations that are possible in the internet age, Johnson added.

"I really think that the model of the future is the sharing economy. It's Airbnb. It's Uber. It's Uber everything," Johnson said. "It's eliminating the middle man."

Johnson dissed Obamacare and said that his own medical insurance costs have quadrupled, even though he hasn't seen a doctor in three years. It's time for a fee-for-service, advertised-outcomes health care system with no middle man and no monopolies, Johnson said. That would lead to the sort of "Stitches R Us" bargain health care outlets that people need and deserve, Johnson said.

On foreign policy, Johnson promised not to repeat what he saw as mistakes made by President Barack Obama and former secretary of state Hillary Clinton, who is now the Democratic presidential nominee.

Efforts to effect regime change never work for the U.S. and it's time to stop trying to police the world, Johnson said. 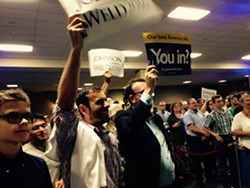 Marijuana should be legal, gun rights must be protected and Social Security needs to be less generous or the program will go bust, suggested Johnson, who served two terms as governor of New Mexico. Weld served as governor of Massachusetts.

Johnson took several questions from the crowd, including one from Jarrod Sammis of Fair Haven. The twentysomething man said many of his peers see their economic future as less bright than that afforded their parents and grandparents. It used to be that a couple could buy a house and car on one income, and one parent could stay home to watch the kids, Sammis said. Retirement came with a good pension, he added. Now young people struggle to afford an apartment — let alone a house — and worry their 401(k) plans won't translate to a secure retirement, he said.

Johnson responded that his generation has failed young people with high-interest student loans and a government system that doesn't give them enough opportunity. "My generation has screwed it up for your generation," Johnson said.

After hearing Johnson's answer, Sammis told a reporter he wanted more specifics from Johnson on ways to improve the situation, but planned to vote Libertarian regardless. Johnson's emphasis on small government and personal freedoms resonates, Sammis said. "It's time. We need a change."

Also ready to vote for Johnson: Amy Russell of South Burlington, who is no fan of major party candidates Clinton and Republican nominee Donald Trump. "I'd of voted for a horse in a suit rather than those two," Russell said.

She liked Johnson and Weld's platform to legalize pot, allow school choice, protect the right to bear arms and shrink taxes. Russell had been leaning toward Vermont's own Sen. Bernie Sanders (I-Vt.) before his presidential bid came to an end earlier this summer. "I was all for Bernie — but he's gone," she said. "He's disappeared."