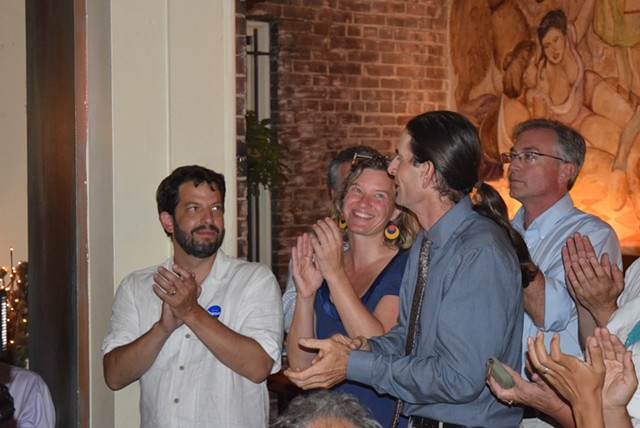 Now, a Vermont Republican contends that both Sanders and Pearson violated state campaign finance laws in the process.

At issue is a May email Sanders sent to the vast network of supporters he established as a candidate for the Democratic presidential nomination. Sanders urged recipients to split a contribution between him and eight like-minded state legislative candidates around the country, including Pearson, who worked for Sanders in the late 1990s.

Pearson, of Burlington, is currently a Progressive Party state representative. He’s running as a Progressive/Democrat for one of six seats representing Chittenden County in the state Senate.

“Chris is a good friend of working people and of mine,” Sanders said in the email.

Pearson ended up raising approximately $90,000 for his campaign — more than $80,000 of which Toensing said can be tied to Sanders’ email solicitation.

Pearson used his windfall to make contributions to other state candidates. And the cash gave Pearson a significant leg up financially in the crowded field of state Senate candidates. He won a Democratic nomination in the August 9 primary.

Sanders’ email list had a value that Toensing estimated to be in excess of $5 million. The list and its value should have counted as an in-kind contribution to Pearson’s campaign, Toensing argued. Neither Pearson nor Sanders declared it as a contribution in campaign finance reports, he noted.

Because the value of the email list far exceeds the $1,500 per person contribution limit, the gift violates campaign finance law, Toensing said.

Sanders made several similar appeals for candidates in state and congressional races around the country, but Toensing said he focused his complaint on Pearson, who was the only Vermont candidate Sanders chose to single out in the email.

“Here you’ve got the Sanders campaign drawing from all these interests outside of the state to overwhelmingly influence the state senate race,” Toensing said. “It’s everything Sen. Sanders rails against.”

Both Pearson and Sanders dismissed the latest accusation as politically motivated.

The argument bears some resemblance to a case last year, when Sorrell accused Dean Corren, the 2014 Progressive/Democratic candidate for lieutenant governor, of violating campaign finance laws after the Vermont Democratic Party used its email list to promote Corren’s candidacy. Sorrell argued that the list had a value of $255, while Corren was limited to receiving contributions of no more than $50 per person. Corren continues to fight that case in state and federal court.

Pearson, reached Tuesday while on vacation, said he hadn’t had a chance to read Toensing’s complaint. But of Toensing, he said: “The guy files more lawsuits than Donald Trump. He’s found a new way to harass me and harass Bernie Sanders at the same time.” Pearson said Toensing has been hitting him with public records requests on other matters for months.

Sanders’ spokesman Michael Briggs also dismissed Toensing as someone who specializes “in the underhanded, personal destruction tactics that have made so many people disgusted with the Donald Trump brand of politics in America today.”

“The senator is obviously well within his rights to endorse candidates and recommend to his supporters that they contribute to other candidates,” Briggs said. “This is a common fundraising approach which is done by Democrats and Republicans every day all over the country.”

Toensing may have made at least one incorrect assumption in his complaint. He alleged that Pearson must have had to provide account information to the Sanders campaign to coordinate sharing contributions.

Pearson said he didn’t. Sanders’ campaign used the fundraising website ActBlue, which distributed the money to Pearson without his knowledge, he said.

Sorrell acknowledged he’d received the complaint Tuesday, but because state offices were closed for Bennington Battle Day, he said he and his staff had not examined it closely enough to comment.