Air Show Noise Sets Off Some Burlington Residents | Off Message 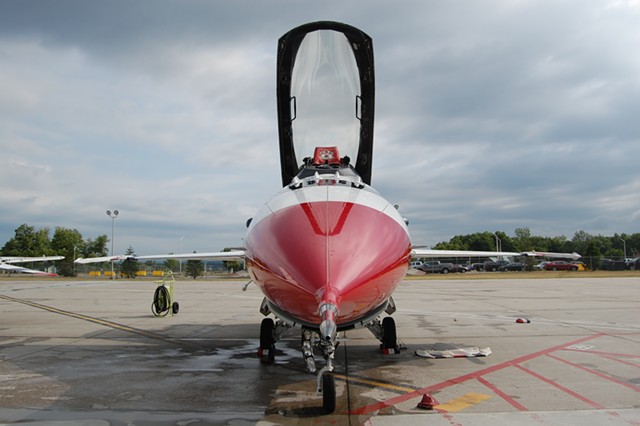 Some Burlington residents are making noise about the loud and low passes made by military jets and aerobatic aircraft ahead of this weekend’s Wings Over Vermont air show. Both Thursday and Friday, aircraft buzzed the Burlington waterfront, getting ready for a spectacle that organizers said could draw up to 40,000 people.

But the loud practice runs prompted some concerned citizens to vent online — or call the police. Chief Brandon del Pozo said “numerous” calls about the noise had the potential to clog the dispatch switchboard and hinder the response to an actual emergency.


“Please advise the public that no number of calls to the police will alter the plans for the show or the level of noise it creates,” del Pozo said in a press release.

The mayor’s office confirmed several noise complaints from people who either called or came to city hall in person.

The Air National Guard received several calls, too, said Maj. Chris Gookin, the state public affairs officer. But there’s nothing they can do to alter the event.

“The air show is here,” he said. “I’m more focused on the fact that it’s the 70th anniversary of our Air National Guard.”


He added: “Some people are just bound and determined to just not be supportive, and that’s part and parcel of our business, to allow people to voice their opinions, their concerns, their compliments — all that stuff.”

Vanderputten said she was on North Beach Thursday when several U.S. Air Force Thunderbirds screamed through the sky.

“It was one of the most terrifying experiences of my life,” she said. “A formation of military jets buzzed right over the beach several times; people clapped their hands over their ears, children screamed and burst into tears, and several people started running, not knowing whether it was an attack or a mobilization or just practice for this weekend’s air show.”

The air show should find a new home in the future, Vanderputten said.


“This kind of flying is extremely dangerous in a high-density urban area; it has no place in Burlington,” she said. “We have children, refugees, veterans and countless other people who do not perceive these military jets as exciting, but as something to be frightened of.”


Kelly Mangan was at home Friday in the New North End when the jets roared by, prompting her to pound out a profane tweet.

“It’s just very aggravating,” she said by phone. “My husband works from home, and the last couple days, when he’s trying to be on conference calls with people in other parts of the country and then the jets come screaming overhead — you can’t hear anything and it’s just really disruptive.”

The first air show was held in 2006. The Parks Commission and the Waterfront Event Advisory Committee approved this year’s air show in spring 2015 after holding a series of public forums, according to Jesse Bridges, the city’s parks, recreation and waterfront director and harbormaster.


With a forecast for a rainy weekend, the two-day schedule could be altered — though Wings Over Vermont vowed to try and get it all in. Weather that “could potentially impact public safety” may force a cancellation or postponement of the rain-or-shine event, the organization said.


“Air show visitors are encouraged to come prepared for all types of Vermont summer weather conditions,” the organization said in a statement.


A few hundred people gathered on the waterfront Friday to watch a day of practice. A Sikorsky Black Hawk helicopter hovered over the water to simulate a combat search-and-rescue scenario, while a Pitts aerobatic airplane dipped and dived through the sky.


“I thought we were under attack yesterday when the jets were practicing,” George Demas said as he glanced up at an aircraft. “I was wondering if it was 9/11 again, but then I remembered it was the airshow.”