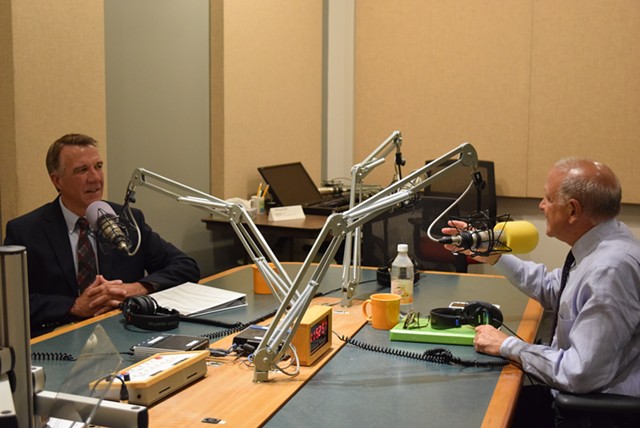 Vermont Republican Party chair David Sunderland has inserted himself into the primary campaign between his party’s two candidates for governor. In an email sent on Friday night, he called on candidate Bruce Lisman to prove or withdraw an accusation that rival Phil Scott was behind a series of phone calls attempting to deceive voters.

Sunderland explained the rare, intraparty intervention on Saturday morning. “You simply cannot accuse an opposing campaign of illegal activity without a drop of evidence,” he said. “We’re not picking sides here, but if there’s no evidence of the accusation, we can’t tolerate that.”

At issue are recent phone calls to Lisman supporters, who were allegedly reminded to vote on August 23 — two weeks after next Tuesday’s actual primary election date.

Mary Richter of Northfield said she received one of them. When she told the caller, whose identity she didn’t catch, that she was planning to vote for Lisman, she said, he read off a list of negative things about the candidate, including a sexual harassment allegation. The caller asked if she would be more or less likely to vote for Lisman if she knew about these things.

Finally, she said, the caller reminded her to vote August 23, which she knew was not the primary date. Richter, who said she’s never been active in politics and isn’t a Lisman volunteer, sent the campaign a message about the call via Facebook.

Sunderland said while the phone calls themselves are troublesome, his chief concern is sorting out what he described as "very serious" accusations by Lisman. Sunderland said a Friday afternoon press release from Lisman campaign manager Shawn Shouldice “clearly suggested a link between Phil Scott and voter deception.”

It read: “Really, Phil? After saying you would run a positive campaign and one that your children could be proud of, you are letting this stuff transpire?”

That prompted Sunderland's email response, hours later, on Friday night. The party chair wrote, “If such evidence exists, we will have to have it completely and thoroughly investigated by the Vermont attorney general and the Vermont secretary of state.”

In the same email, Sunderland gave Lisman’s campaign until 9 a.m. Saturday to produce evidence or retract the accusation. By 9:45 a.m., Sunderland said he hadn’t heard from the campaign. Sunderland, who described his party's primary campaign as "difficult," said Lisman had not returned a message he left Friday night.

Brittney Wilson, Scott’s campaign coordinator, said Scott’s campaign had nothing to do with the calls, describing the accusation as “absolutely, blatantly false and another one of [Lisman’s] desperate lies.”

On Saturday morning, Shouldice contended Lisman’s campaign isn’t actually accusing Scott of masterminding the phone calls and has no plans to retract anything. “I’m not saying Phil Scott’s doing this,” she said. The statement was carefully worded to avoid that implication, she insisted, adding the goal was to get Scott to denounce the calls.

A moment later, however, Shouldice came very close to an all-out accusation, asking who else would benefit from such activity.

Less than an hour later, Shouldice sent out another press release in which she again sideswiped Scott’s campaign with the allegation.

“The Scott campaign has spent $47,000 with SPG, LLC of Arlington, Virginia for ‘robocalls’ and ‘phone banks.’ Voters deserve to know, in light of the ongoing fraudulent push-polling being inflicted on Vermonters, specifically what services SPG, LLC is providing to the Scott campaign,” Shouldice said.

Scott’s campaign did hire SPG, a political consulting firm, to make phone calls to Vermont voters this week, Wilson said. The expense is described on the state's campaign finance reports as "Media-phones/robocalls" because that's the category that best describes it. But the calls were live, not recorded, she said.

Wilson said the Scott campaign calls have been directed to already-identified supporters, reminding them to vote next Tuesday. She said SPG used this script in the calls and did not follow up with further questions:

Hi, I am calling on behalf of Phil Scott. Please join Governor Jim Douglas and more than one hundred current and former elected Republicans in voting for Phil Scott for Governor.

Election Day is this coming Tuesday August 9th and your support is vital to making sure Phil's vision of affordability and no new taxes for Vermont is realized.
Don't sit this election out — join your friends and neighbors in supporting Republican Phil Scott for Governor.

This call was paid for by Phil Scott for Vermont.


Scott, meanwhile, is accusing a pro-Lisman political action committee of violating the state’s campaign finance laws. Scott’s campaign filed a formal complaint Friday with the Attorney General’s Office accusing American Future Fund Political Action Committee, a pro-Lisman PAC, of failing to disclose the names of those contributing more than 25 percent of the cost of an ad in the commercial itself, as required.