Sanders Spreads Support, but Not in Vermont's Gubernatorial Race | Off Message

Sanders Spreads Support, but Not in Vermont's Gubernatorial Race 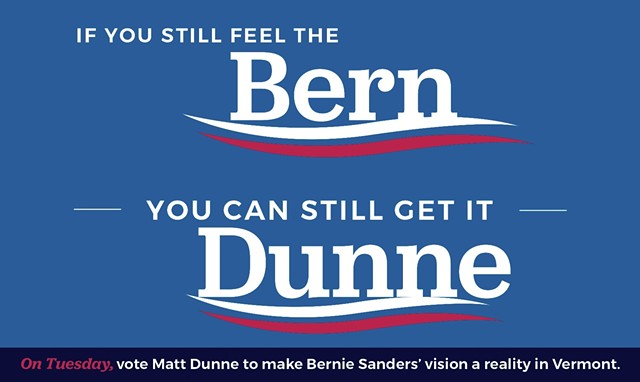 Fresh off his run for the presidency, Sen. Bernie Sanders (I-Vt.) endorsed 18 candidates for Vermont state office this week. They included incumbents and challengers seeking offices ranging from state representative to lieutenant governor.

There was one notable omission: As of Saturday morning, Sanders had not weighed in on Vermont's race for governor.

That hasn't kept one Democratic gubernatorial candidate, former state senator Matt Dunne, from tying himself at the hip to Sanders. Dunne has repeatedly invoked the progressive icon's name in television advertisements and, late this week, he sent a mailer throughout the state mimicking Sanders' campaign logo.

"If you still feel the Bern," it says on one side of the piece, "You can still get it Dunne."

On the other side, it reads, "For Bernie Sanders' supporters, Matt Dunne is the clear choice for governor."

In an open letter to the Dunne campaign, Brattleboro resident Rebecca Bartlett complained that the mailer was deceptive.

"I am trying to figure out how your campaign can constantly refer to Bernie — and use his campaign's art on your fliers — without such an endorsement," she wrote, copying Seven Days. "This looks to me like craven coat-tailing. It has greatly diminished your candidacy in my eyes. I'm not a Bernista; I just care about the state of our party in Vermont and don't like seeing elections debased by deceptive campaigning." 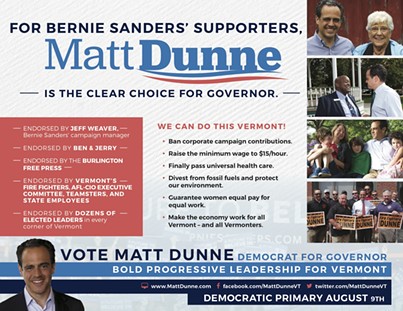 A Dunne opponent, former Democratic senator Peter Galbraith, also criticized the mailer. He alleged that it pilfered his own proposals — to ban corporate campaign contributions and raise the minimum wage to $15 an hour — to make Dunne appear more progressive.

"The things he's proposing on the back are largely plagiarized from me. What's on the front is graphics plagiarized from Bernie Sanders," Galbraith said. "That says something about his character."

"It’s no secret that we’re aggressively courting Bernie Sanders supporters," spokeswoman Jessica Bassett said in a statement, arguing that her boss has shared Sanders' values throughout his political career. "While we have reminded Vermonters that Matt was the only candidate for governor to endorse Bernie before primary day, we’ve never claimed a Bernie Sanders endorsement. As the mailer states, Matt has been endorsed by Bernie’s campaign manager, Jeff Weaver, and, as we announced yesterday, by nine national delegates for Bernie."

Sanders' own campaign has not cried foul.

"Not using our actual logo but certainly evocative of it," Weaver said in an email. "Doesn't imply an endorsement to me. Does look like he is trying to convey to voters that he shares Bernie's views."

So who has Sanders endorsed?

For statewide office, he has backed only Sen. David Zuckerman (P/D-Chittenden), who is running for lieutenant governor. For the state Senate, he threw his support behind three incumbents this week: Sen. Tim Ashe (D/P-Chittenden), Sen. Dick McCormack (D-Windsor) and Sen. Anthony Pollina (P/D-Washington). In May, Sanders endorsed a fourth state Senate candidate, Rep. Chris Pearson (P-Burlington), who is running to represent Chittenden County.

Sanders has endorsed 14 candidates for state representative, according to aide Phil Fiermonte. They are: