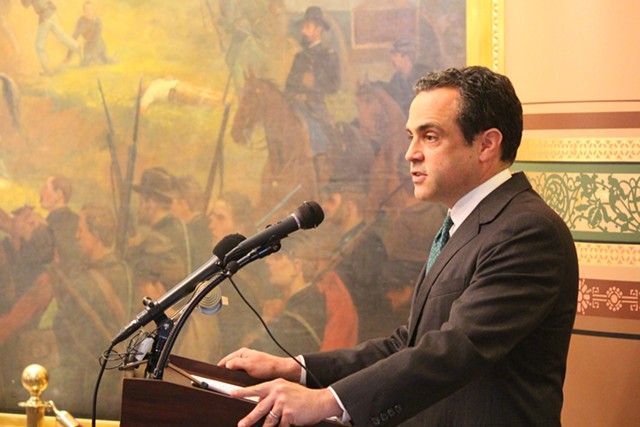 At a Statehouse press conference in May, Democratic gubernatorial candidate Matt Dunne spoke out against those who finance their own political campaigns.

“I will personally be adhering to the contribution limits set for an individual Vermonter and will not be self-funding the campaign above those limits,” Dunne said. “And we’re calling on all the other candidates in the race to do the same and abstain from self-funding their campaigns.”

Dunne kept his pledge — for a time. He donated $2,000 to his campaign in March and another $2,000 in July. That’s within the $4,000 limit to which non-candidates must adhere in Vermont. (Candidates themselves are legally allowed to invest as much as they want in their own campaigns.)

But this week, as Dunne’s campaign appeared to crater, he broke his promise. According to filings with the Secretary of State’s Office, the former Google manager made a $50,000 personal loan to his campaign on Tuesday. He made another $45,000 loan on Wednesday.

“Including the money that you put into your own campaign, Peter?” Dunne asked Galbraith during a heated debate on Vermont Public Radio. “How much?”

As of Friday morning, Dunne’s pledge to refrain from self-financing remained on his campaign website.

In a statement to Seven Days, Dunne spokeswoman Jessica Bassett did not address the apparent flip-flop.

“Matt made a bridge loan to the campaign that we expect will be repaid in full based on outstanding commitments and ongoing fundraising,” she said.

Campaigns are free to pay back loans to their candidates, even after a race is over, but they rarely do in Vermont. Typically, candidates will eventually forgive the loan, at which point it is considered a direct donation.

Dunne isn’t the only wealthy tech exec infusing his candidacy with last-minute cash. As Seven Days reported Thursday, Silicon Valley venture capitalist Reid Hoffman bought $220,000 worth of ads backing Dunne’s campaign late this week. Because Hoffman spent the money himself and did not directly contribute to Dunne’s campaign, it is legal for him to spend unlimited sums on such ads.

“Can you believe that fucker?” the former ambassador said, emphasizing that he was on the record. “Matt Dunne really doesn’t have the integrity to be the governor of Vermont. Imagine: Having self-funded in violation of his own campaign pledge, he then attacks me for having self-funded.”

Galbraith added, “Matt Dunne — he just has a hard time with the truth.”

“This is another instance of Matt Dunne saying one thing while doing another on key progressive issues like gun safety, the environment and campaign finance reform,” her campaign manager, Molly Ritner, said in a statement. “Matt claims to be the progressive choice but, in my experience, progressives stand by their word even during a tough fight. Sue Minter is the candidate Vermonters can trust.”