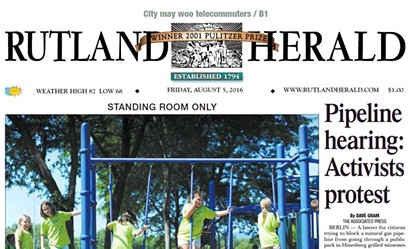 After green-lighting a story in Friday’s paper about financial troubles at the Rutland Herald, news editor Alan Keays was fired later that day by owner R. John Mitchell.


According to education reporter Lola Duffort, Keays was summoned into a meeting with Mitchell and publisher Catherine Nelson late Friday afternoon.

“He just walked out,” Duffort told Seven Days in a call from the Herald newsroom. “People asked if [they] had fired him, and he nodded his head and walked out.”

Seven Days heard from seven people with direct knowledge of the situation late Friday, all of whom corroborated elements of the story. Neither Mitchell nor Nelson immediately responded to a request for comment.

The situation appeared highly fluid. Shortly after Keays’ firing, according to Duffort, several employees left the newsroom to meet with Keays in the paper’s parking lot.

“The entire newsroom is walking out,” Duffort said shortly before 5 p.m. “The paginators are leaving. The copyeditors are leaving. I don’t know how many people are going to stick around, but I don’t think a paper’s coming out tomorrow.”

According to another employee, “All hell has broken loose … Some of the reporters are crying. Everyone looks shell-shocked.”

Later in the evening, employees told Seven Days they believed the Herald would still go to press in time for Saturday’s paper. Some of those who had walked out later returned to the building to meet with Mitchell and Nelson in an effort to rescind Keays’ firing. 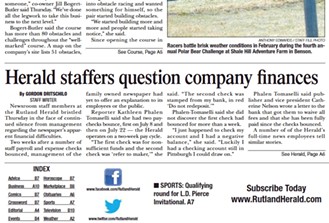 Nelson emailed the staff shortly after 6 p.m. to announce that there would be a staff meeting Monday at 11 a.m.

“I know that we have rescheduled a few times but this will definitely happen,” she wrote. “See you then. Thanks for your patience.”

Keays’ firing came after he approved a story documenting serious financial problems at the paper in recent weeks. Written by staff writer Gordon Dritschilo and quoting five other employees by name, it said that in recent weeks employee checks had bounced, staffers had not been reimbursed for expenses and freelancers had not been paid.

The story ran on the front page of the Herald on Friday.

According to one employee, Keays was fired not for approving the first story but for advocating a follow-up story planned for Saturday’s paper.

“Alan went to the mat for us, so we should do the same,” Duffort said. “And they shouldn’t be able to get away with this.”

According to several sources, employees of the Herald and its sister paper, the Barre-Montpelier Times Argus, were informed Thursday that they would not receive their pay that day via direct deposit. Many received paychecks Friday afternoon, but one staffer said that his or her bank would not cash the check.

The situation could soon trigger enforcement by state government. Commissioner of Labor Annie Noonan told Seven Days Friday afternoon that her office had received several inquiries from employees about their rights. One staffer filed a formal complaint, she said, but then asked to hold off on activating it until Monday.

Noonan said she had not spoken with management at the Herald and would not do so until the complaint was formally filed.

The Rutland Herald published a print edition on Saturday, but it did not include the follow-up story for which Keays had advocated. The paper made no mention of Keays’ firing in print or online.

Several employees said late Friday that they were planning to present Mitchell and Nelson with a letter on Monday threatening to quit en masse if Keays was not rehired. Others threatened to skip work this weekend.

Steve Pappas, editor of the Times Argus, addressed the situation in an email to his employees late Friday:

I’ve heard from a number of staff regarding their willingness to complete shifts in the coming days. While I understand where those feelings are coming from, I can only advise that you make decisions, and accept any associated consequences, that you can stand by.

I am going to err on the side of trust that today was a wrinkle. I will work my weekend hours as scheduled with faith that paychecks issued today will be clear on Monday. I have no reason to believe this isn’t true. As journalists we know it is irresponsible to work without all of the facts — to do otherwise is assuming.


Pappas did not respond to a request for comment.


Note to readers: If you have direct knowledge about this unfolding situation, call Paul Heintz at (802) 598-8946 or email paul@sevendaysvt.com. We will guarantee your anonymity.