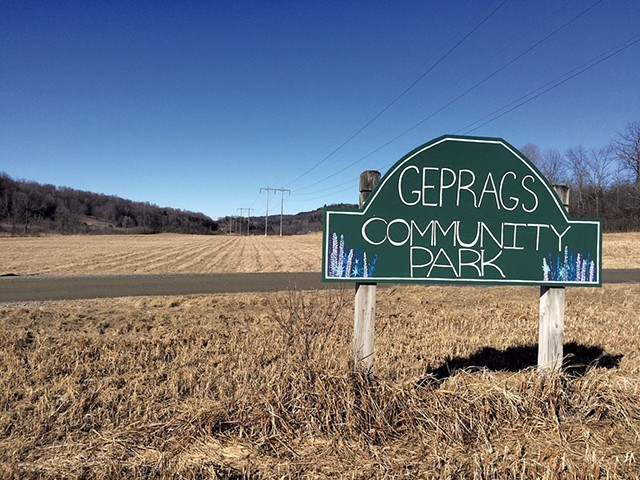 Vermont Gas Systems and the Hinesburg Selectboard have come to an agreement on the company’s plans to construct a pipeline through the town-owned Geprags Community Park. A group of residents continue to oppose it, however.

The Public Service Board, which has yet to approve the company’s request to use eminent domain to take the Geprags parcel, will review the request next Thursday. In a widely criticized move, the PSB has decided to close that hearing to the public because protesters have repeatedly interrupted previous proceedings.

The 41-mile natural gas pipeline, which will run from Colchester to Middlebury, has spawned ongoing protests and encountered many setbacks, including major cost overruns.

The selectboard withdrew an earlier agreement with Vermont Gas after a public outcry. Under the new agreement, approved in a 3-2 vote Thursday evening, the board negotiated additional concessions from the company. Among them: Vermont Gas will use horizontal drilling to minimize the impact on the park’s wetland area, and it will pay the town $250,000 for easement rights. (Under the previous agreement, it would have paid $75,000.)

This is the last pending eminent domain case standing in the way of the pipeline, according to Vermont Gas, which hopes to complete its pipeline this year.

Spokesperson Beth Parent issued a press release Friday morning that stated, “This agreement brings important value to the town and allows the company to move forward with construction in Geprags. Hinesburg is the last remaining parcel needed to secure 100 percent access to the project’s right-of-way, and is an important step toward timely completion of the project.”

But the battle may not be over. A group of Hinesburg residents, represented by James Dumont, is still challenging the eminent domain request on the grounds that land already designated for a public use cannot be seized for another public use.

In a memo filed with the Public Service Board earlier this week, Dumont makes the case that the board should reject the selectboard’s agreement with Vermont Gas when reviewing the eminent domain request for Geprags. He cites a state statute on municipal parks that states: “Land, rights, or other property acquired by a municipality under this chapter shall not be sold or diverted to uses other than conservation or recreation except after approval by an affirmative vote of the voters of the town at the annual meeting.”

Meanwhile, activists with Rising Tide Vermont, a group that has long waged a campaign against the pipeline, announced early Friday yet another protest.
“Two people shut down construction at a Vermont Gas pipeline worksite today, citing growing concerns about public exclusion in the permitting process,” the group announced.