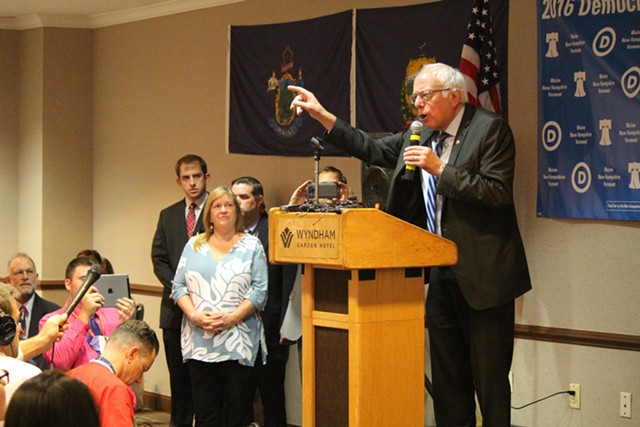 "What we are dealing with now is something kind of unique — and I believe, quite honestly, the worst Republican candidate in the modern history of the United States of America," Sanders told a breakfast crowd at a Wyndham Garden Hotel near Philadelphia International Airport. "What makes him unique and extremely dangerous is he is a demagogue."

Sanders reminded the delegates from Vermont, New Hampshire and Maine that before Trump ran for president he repeatedly questioned whether President Barack Obama was born in the United States.

"It was about undermining the legitimacy of the first African American president in the history of our country — that he should not be president because he is African American," the senator said. "And that is disgusting. And that is the kind of person that we are running against."

Sanders made his remarks the morning after delegates to the Democratic National Convention — with an assist from Vermont — named former secretary of state Hillary Clinton their presidential nominee.

"As of yesterday, I guess, officially our campaign ended," Sanders noted during the breakfast.
He revealed that the occasion elicited a phone call from Obama himself.

"I just talked to the president last night. He was kind enough to call," Sanders said. "And what I told him is what I've said publicly: Of course, as a nation, we are much, much better off today than we were when [former president George W.] Bush left office, and we were losing 800,000 jobs a month."

But, he continued, "It is not good enough."

"Yes, we're better off than we were eight years ago, but this country faces enormous problems," he said. "So it's not just about electing candidates. It is about transforming America and making sure that candidates who are elected remain accountable to the people."

Even as he praised Obama, Sanders fired a shot across the president's bow.

"I'm going to do everything I can to make sure the TPP does not get to the floor of the Congress," he said, referring to the proposed Trans-Pacific Partnership trade agreement. "One can love the president and respect the president, as I do, but on this issue President Obama is dead wrong, and we have got to defeat this TPP." Sanders took the opportunity to thank supporters from the three northern New England states, all of which overwhelmingly backed his presidential campaign. He recalled hours-long lines some Maine voters braved to take part in their March caucuses. And he praised New Hampshire for launching his campaign with a 22-point win.

"That victory kind of made the country become aware that we were a serious campaign, and we were off and running," he said.

Sanders saved his kindest words for his home state of Vermont.

"It brings tears to my eyes — it really does — the kind of support that we have received," he said. "The fact that we won 86 percent of the vote in our own state is something I will never, ever forget. It just means a lot to me — deeply."

"You have sustained me in this campaign," he told the Vermonters. "And I have done my best to try to represent the values of our state."