With Assist From Sanders, Clinton Claims Democratic Nomination | Off Message 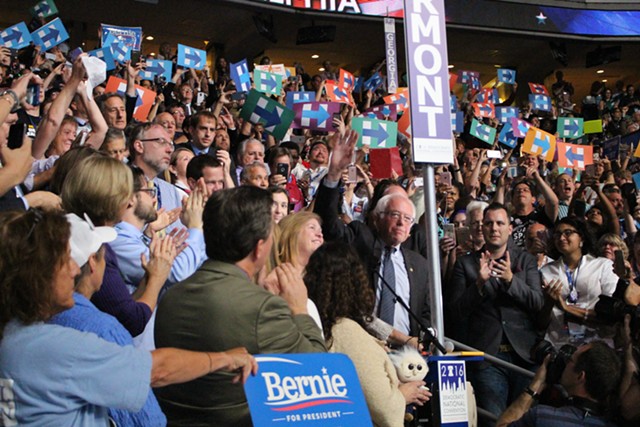 In a bid to unify a fractured Democratic Party, Sen. Bernie Sanders (I-Vt.) on Tuesday motioned for rival Hillary Clinton to be named its presidential nominee.

The dramatic gesture formalized Clinton’s status as the first woman to win the nomination of a major American political party. It reframed Sanders as a team player for a party he had yet to join. And it began the reconciliation required after a long and divisive primary.

The senator from Vermont made his motion at the end of a state-by-state roll call inside Philadelphia’s Wells Fargo Center. One by one, party activists and elected officials from Alabama to Wyoming delivered their delegate counts — with a bit of local color.

One delegation, from the group Democrats Abroad, turned over its microphone to Sanders’ older brother, Larry, who has lived for decades in the United Kingdom.

“I want to read, before this convention, the names of our parents: Eli Sanders and Dorothy Glassberg Sanders,” he said with tears in his eyes. “They did not have easy lives and they died young. They would be immensely proud of their son and his accomplishments.”

When it came time for Vermont to announce its delegate count, 18-year-old South Burlington High School graduate Aster O’Leary stood under a banner featuring the state’s name and said, mysteriously, that Vermont would pass.

As the remaining states did their duty, Sanders and his wife, Jane O’Meara Sanders, emerged from a passageway, descended a flight of stairs and joined the Vermont delegation on the second level of the arena. They hugged and shook hands with neighbors, friends and family members and then took seats on either side of Vermont Democratic Party chair Dottie Deans.
Once every other state and territory had delivered its results, Deans stood to do the same. Vermont, she said, had fought in the “revolution that gave birth to our United States of America” and in the “political revolution of 2016.” This year, she said, it had cast “22 votes for our beloved Sen. Sanders and four for the next president, Hillary Clinton.” With that, Deans turned the microphone over to Sanders.

The presidential candidate waved to the crowd as it chanted his name. He seemed to savor the final moments of his campaign. Then he called on the convention chair to suspend the rules.

“I move that all votes — all votes cast by delegates — be reflected in the official record,” Sanders said. “And I move that Hillary Clinton be selected as the nominee of the Democratic Party for president of the United States.”

He put the microphone back on its stand, kissed and hugged his wife, waved to the crowd and walked out of the arena.