Sanders Backers From Vermont Join Protests at the Philly Convention

Vermonters were among roughly 3,000 Bernie Sanders supporters who shouted and strutted their way down Broad Street in Philadelphia in a pair of marches on a miserably hot and humid Monday afternoon. Their destination was Franklin Delano Roosevelt Park, where a second day of angry protests against Hillary Clinton’s nomination would end amid thunder, lightning and lashing rain.

“I wanted to be a witness to this, to be a part of this history,” said Erin Stillson-Wolf, explaining why she, her husband and their two children, ages 3 and 10, had traveled to Philly from Jonesville, Vt., in a camper van.  Bernie Sanders had inspired her to “spread some hope,” the 30-year-old mom added.

Part-time Waitsfield resident Lynda Mischler said she came to Philly with her partner, Ray Ginsbury, who lived in Colchester for 30 years, in part to “show that Bernie’s supporters aren’t all millennials.” The couple, both 68, were motivated to work for Sanders’ nomination by “Vermont’s culture of people caring for one another, of stepping up without being asked,” Mischler added. “It’s the foundation of what politics should be.”

For Pamela Wilcox, a small business owner in Brattleboro, Sanders provided a political education as well as motivation. “I’ve just started jumping into the fire,” Wilcox said. “I was a 55-year-old with her head in the sand. Bernie woke me up.”

Like Stillson-Wolf, Wilcox has become a member of Rights and Democracy, a Burlington-based organization that works to elect progressive candidates to offices in Vermont. “I got fired up,” Wilcox said. “I got with RAD.”

Each of the Vermonters interviewed by Seven Days expressed disdain for Hillary Clinton. Wilcox called her “evil” and Stillson-Wolf said the presumptive Democratic nominee is “not to be trusted.” Mischler declared: “She represents all the things we’re against. Hillary will continue corporate greed and her own cheating and deceit.”

Along with the overwhelming majority of activists who joined one of two marches on Monday, the Vermonters indicated that they are strongly 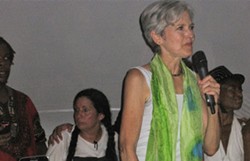 inclined to vote for Green Party candidate Jill Stein rather than Clinton. The Green leader capped the day’s events in a large white tent in FDR Park with a speech that was cut short by a fierce electrical storm.

Cornel West, an African American professor who had supported Sanders and now backs Stein, gave the candidate a hurried introduction as storm clouds swirled above the tent. Despite the high-90s heat, West was wearing his trademark scarf and three-piece suit.

Medea Benjamin, a peace activist who regularly confronts right-wing politicians as a leader of a women’s antiwar group known as CODEPINK, also spoke. “As a woman,” Benjamin told her sweating listeners, “I’m often told that we need to elect a woman president. I say yes — and that woman is Jill Stein.”

Benjamin admitted, “I actually am scared of Donald Trump.”  She added: “But I’m scared of Hillary Clinton too.”