Guantanamo Detainee Represented by Vermont Attorneys to be Freed | Off Message

Guantanamo Detainee Represented by Vermont Attorneys to be Freed

An alleged Al Qaeda member who has been represented for years by two St. Johnsbury attorneys is slated to be freed from his Guantanamo Bay prison cell after 14 years in captivity.

Abdul Zahir, 44, will likely return home to Afghanistan in the coming months after a recent military ruling, his attorneys said. The accused terrorist has been imprisoned at the prison in Cuba since his suspected involvement in a 2002 grenade attack that injured a Canadian journalist and two others in Afghanistan.

The Center for Constitutional Rights assigned attorneys David Sleigh and Robert Gensburg to represent Zahir. The lawyers have made roughly a dozen trips to Guantanamo to visit their client, and have fruitlessly lobbied military officials to grant him a trial.

"Obviously we're thrilled," Sleigh told Seven Days. "We've been beating our heads against the proverbial wall for years without any action at all. I've never been in a position to beg the authorities to charge my client for wrongdoing so he'd at least have a trial, and we've done that for years with no response. Then we get this notice in May, and a month and a half later it's, 'OK, you can go home.'"

Recently unclassified Department of Defense records reveal that Zahir had a "limited role in Taliban structure and activities," and was "probably misidentified" as someone with ties to Al Qaeda weapons trafficking.

Zahir's release comes as President Barack Obama tries to accelerate Guantanamo detainee transfers before he leaves office, according to various media reports. Some 70 detainees remain at the prison, the lowest level since it opened. About 30 of those prisoners are now scheduled to be released, Sleigh said.

A recently unclassified report from the Department of Defense revealed that Zahir has not been questioned since 2008, even though he was cooperative when interviewed. 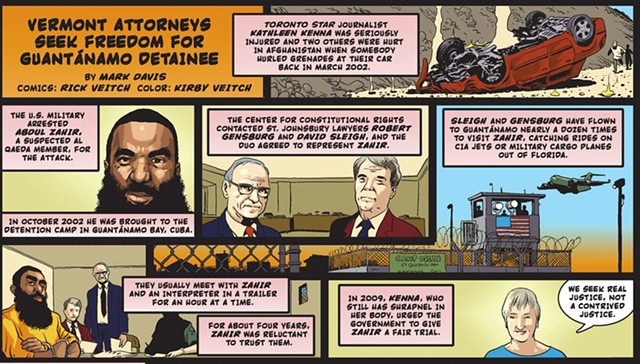 He was captured during a Special Forces raid targeting another man who was suspected of producing chemical and biological weapons for Al Qaeda, the report says. But Zahir was likely a low-level translator and bookkeeper for the Taliban, according to the report. Zahir said he worked for the Taliban because the organization threatened his family.

Zahir "never made statements clearly endorsing or supporting [Al Qaeda] or other extremist ideologies — and since at least 2003 he has sought to distance himself from any allegiance to the group," says the report, which later adds that Zahir "does not appear to view the U.S. as his existential enemy."