With Focus on Guns, Minter Seeks to Separate Herself From the Pack | Off Message

With Focus on Guns, Minter Seeks to Separate Herself From the Pack 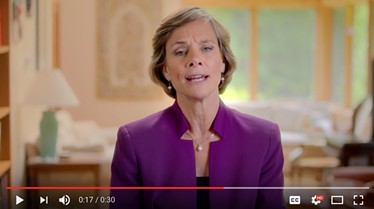 Two years ago, Ann Braden wouldn't have predicted that a major candidate for governor of Vermont would run a television advertisement calling for gun control.

"But it often takes time for the state capital to catch up to public opinion," says Braden, who founded Gun Sense Vermont after the December 2012 school shooting in Newtown, Conn.

Now, with less than three weeks remaining before Vermont's gubernatorial primary, one candidate is staking her candidacy on the controversial issue. In a television advertisement released Wednesday, Democrat Sue Minter ties firearms to domestic violence and pledges to take on "the gun lobby."

"We need to keep guns away from domestic abusers and require background checks on all gun sales," she says.

It may not be the riskiest strategy in a Democratic primary. The Castleton Polling Institute found last February that 97 percent of Democrats support universal background checks. Even independents and Republicans overwhelmingly support the concept, the poll concluded.

But gun rights supporters are a highly motivated crowd — and Minter's ad could galvanize them against her in a general election, should she prevail. Both Republican gubernatorial candidates, Lt. Gov. Phil Scott and retired Wall Street banker Bruce Lisman, say they oppose new state gun laws.

Evan Hughes, vice president of the Vermont Federation of Sportsmen's Clubs, says his organization "expects that this type of ad will motivate its membership." He says the group has no current plans to endorse a candidate — but that could change.

"She's in a tight primary and she's looking for some way to get further out on the left than her two opponents," Hughes says. "It's the federation's position this will hurt her."

Minter's Democratic rivals, meanwhile, take issue with her suggestion that she's out in front on gun control.

"I'm the candidate for governor who's willing to talk about it," she says in the ad. "I won't back down from this fight. You can count on it."

According to Peter Galbraith, a former ambassador and state senator who is also seeking the nomination, "Saying you're a leader on an issue doesn't necessarily make you one."

While acknowledging that Minter first called for universal background checks last December, he notes that he only joined the race in March. He argues that he was the first to call for an assault weapons ban — and that he's the only one who plans to actively lobby for one. Both Minter and a third candidate, former senator Matt Dunne, say they would sign such a ban but wouldn't make it their first priority.

"That is an agenda I will push for when I am governor," Galbraith says. "I won't just sign it if the legislature sends it to me. It's something I'll push for."

Dunne spokeswoman Jessica Bassett says Minter's campaign is trying to "muddy the truth" and accuses her of skipping a debate last month in the Northeast Kingdom rather than defend her position where it's least popular.

"The reality is that Matt Dunne has talked loudly and frequently about his support for universal background checks," Bassett says. "Any claim to the contrary is nothing more than a political strategy to mislead voters."

Actually, Dunne's position has shifted several times during the campaign. Last December, he told Seven Days that he did not favor universal background checks. A few days later, he said he was "open to a discussion" about any approach to reducing gun violence. In April, he embraced universal background checks. Asked repeatedly in June whether he supported an assault weapons ban, Dunne's campaign at first refused to say. He later said he did.

Minter stands by the notion that she's led the way.

"I know that I'm the candidate that's been talking about it from early on and continues to raise it and continues to talk about domestic violence," she says. "I have not heard them raise that."

And Minter says she's not worried about alienating general election voters in her quest to win the primary.

"Every issue has its challenges, and I will not back down," she says. "I will also say I think the conversation is shifting — across this country and here. I hear many people thanking me for standing up for this issue."

Braden, who has not publicly endorsed a candidate, agrees. She notes that in recent weeks, Sen. Patrick Leahy (D-Vt.) and Sen. Bernie Sanders (I-Vt.) took part in a filibuster to support gun control legislation, while Congressman Peter Welch (D-Vt.) joined in a sit-in on the House floor to support similar measures. All three once opposed new federal gun laws.

"We're seeing lawmakers really quickly catching up on this issue, and I think Sue is really one of the driving forces in that effort," Braden says. "It's like a snowball rolling down the slope, gaining momentum."