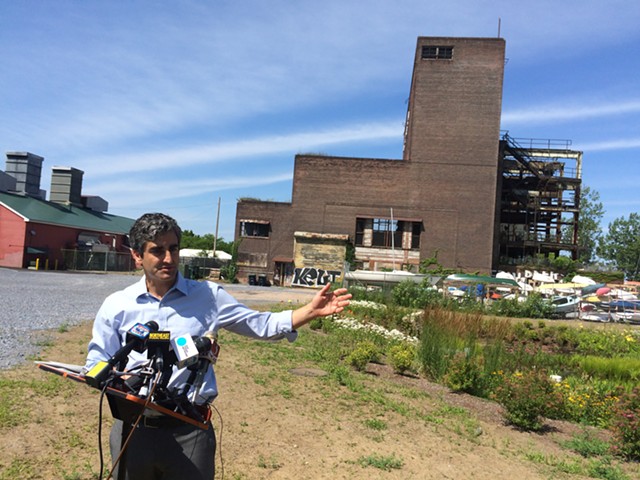 Mayor Miro Weinberger confirmed Thursday that his administration and the group trying to redevelop Burlington's waterfront coal plant have terminated the memorandum of understanding they signed in 2014.

At a press conference held behind the derelict brick building, Weinberger told reporters he is giving the New Moran team until November 11 to prove to the city that they have an updated, financially viable proposal.

What, exactly, that entails, Weinberger couldn't say. But he reiterated his ongoing concerns — that the team lacks people with significant development experience and that they've failed to secure firm commitments from longterm tenants for the building.

Seven Days and other news outlets reported on the possible termination of the agreement Tuesday; at the time, Weinberger's administration would not confirm whether a final decision had been made.

Dissolving the MOU allows the city in the meantime to explore other options, like demolishing the building or finding another development partner to take over the project. The mayor noted that if the administration selects a new partner, they will need to pursue the same basic plan— an events space, with food vendors and space for artists — proposed by the New Moran team and approved by voters in 2014.

"This is not going back to square one," he said.

City councilor Dave Hartnett, who was in the crowd at the press conference, told reporters afterwards, "I think the city council and administration have been more than patient with Team Moran." His view: "I'm at the point where it needs to come down."

Weinberger said city officials have not yet determined the cost of demolishing the building, nor do they know what could be built in its stead. Both questions will be examined during the next few months, he said.

Weinberger pledged to make a final decision about whether to develop or demolish by the end of 2016 or early 2017.