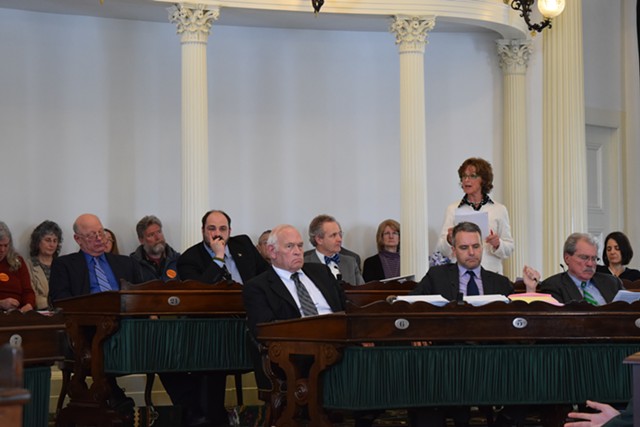 A local and a national organization have combined forces to sue the state over its 3-year-old end-of-life law that allows qualifying terminally ill patients to seek a prescription to hasten their deaths.

The Vermont Alliance for Ethical Healthcare and the Tennessee-based Christian Medical & Dental Associations filed the lawsuit Tuesday in federal court in Vermont. They argue on behalf of several Vermont medical professionals that being required to offer patients the option of assisted suicide violates their religious or ethical beliefs.

Vermont is one of four states to legalize assisted suicide, but the only one that requires medical professionals to advise patients of the option, said Steven Aden, a Washington, D.C., attorney with Alliance Defending Freedom and one of several lawyers representing the plaintiffs.*

“They share a reasonable fear of this being imposed on them,” Aden told Seven Days.

The law, titled Act 39, does not require medical professionals to write a lethal prescription or assist in the patient’s death. But state officials have interpreted the law to mean that qualifying patients must be informed of the option.

According to the state Health Department, “Under Act 39 and the Patient’s Bill of Rights, a patient has the right to be informed of all options for care and treatment in order to make a fully-informed choice. If a doctor is unwilling to inform a patient, he or she must make a referral or otherwise arrange for the patient to receive all relevant information.”

Attorney General Bill Sorrell said the state has not yet been served with the lawsuit. “We’re aware of the general allegations,” he said. “We’ll do our best to defend the law.”

Compassion & Choices Vermont, which helped push the 2013 law through the legislature, defended a patient’s right to know their options under Act 39.

“Physicians should not impose their personal ethics and values on their patients and deny their legal right in Vermont to receive information about all of their end-of-life care options so they can make an informed decision about their treatment options,” the organization’s state director Linda Waite-Simpson said. “All terminally ill Vermonters should be able to make fully-informed decisions about their end-of-life care that are consistent with their own values and faith, and most important for them and for their families.”

The lawsuit lists the Vermont Board of Medical Practice and the Vermont Office of Professional Regulation as defendants. The two entities are responsible for sanctioning non-complying medical professionals.

Aden’s lawsuit cites legal precedence for protecting a physician’s ethical standards. In Roe v. Wade, the landmark 1973 U.S. Supreme Court case that legalized abortion, the court noted, “[N]o physician or other professional personnel shall be compelled to perform any act which violates his good medical judgment. Neither physician, hospital, nor hospital personnel shall be required to perform any act violative of personally-held moral principles.”

The lawsuit names several medical professionals who say their rights have been violated under the law, including: Dr. Rachel DiSanto, a family practitioner in Newport; Dr. Brian Kilpatrick, an internal medicine and pediatric physician in West Pawlet; Lynn Caulfield, a registered nurse who practices in northern Vermont; and an identified pharmacist. Aden said they are not available to comment on the case.

The lawsuit does not spell out any specific instances in which those medical professionals felt compelled to inform a patient about Act 39, but Aden said the suit will include more specifics at a later date.

The Vermont Alliance for Ethical Healthcare, which represents doctors, nurses, pharmacists and other health care professionals, argued against passage of the law in the legislature.

*Correction, July 22, 2016: An earlier version of this story misidentified one of the attorneys involved in the lawsuit. His name is Steven Aden.