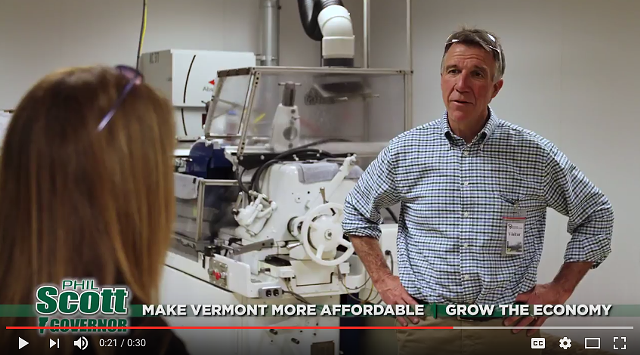 Scott last week aired the same ad online, though he’s the last of the five candidates for governor to hit the TV airwaves. In the clip, he criticizes Republican opponent Bruce Lisman for his negative ad campaign.

“What passes for business as usual on Wall Street has never been in line with Vermont values, so although my opponent’s misleading ads are disappointing, Vermonters know the truth,” Scott says in the 30-second commercial.

Scott’s response suggests that he worries Lisman’s message is gaining traction. A retired Wall Street executive who last week reported spending $1.6 million of his own money on the campaign, Lisman has blitzed Vermont airwaves and mailboxes with ads seeking to link Scott to retiring Democratic Gov. Peter Shumlin.

Scott’s campaign would not say whether there is concern about Lisman’s ads making an impact.

“We did feel like it was time for Phil to remind folks that these are false claims and that they know who he is,” campaign manager Brittney Wilson said.

The ad is the first in a series that likely includes two more, Wilson said.

But the ad buy is barely a ripple compared to that of his rivals. Scott, who started the race with the most name recognition after serving as lieutenant governor for the last six years, is spending just $4,890 on ads in the Vermont television broadcast market, according to WCAX-TV’s Federal Communications Commission filing.
Scott bought just 18 spots on WCAX this week, a number dwarfed by that of the other gubernatorial candidates, according to the FCC report. Democrat Sue Minter, with 107 spots on WCAX, bought the most of the five candidates this week and is spending $42,644 across all stations.

Lisman, meanwhile, is spending $20,157 on TV ads for the same time period.

Wilson said the campaign is working with a carefully thought-out strategy. “This buy makes sense for us now,” she said.

The primary election is August 9 to determine each party’s candidate for the November general election.