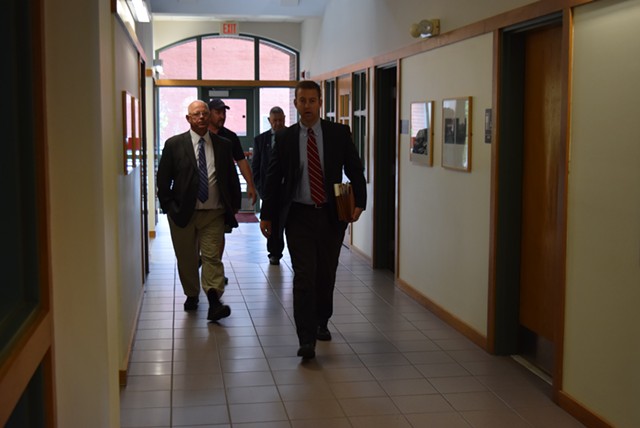 As a judge set dates Monday for the second sexual assault trial for Sen. Norm McAllister (R-Franklin), the lawmaker’s son defended him in an interview on the courthouse steps.

At a brief status conference in the St. Albans courthouse, Superior Court Judge Robert Mello scheduled the trial for August 10-12. Jury selection will be held August 9 — the same day as the primary election in which Franklin County Republican voters will determine whether to nominate McAllister for reelection in November.

After the hearing, McAllister and his attorney, Brooks McArthur, departed. But McAllister’s son, Heath McAllister, lingered, expressing frustration over the charges against his father. In an interview with Seven Days on the courthouse steps, Heath McAllister said he wanted the truth told.

“He didn’t do anything wrong,” he said.

His father had brief consensual sexual relationships with the two women who accused him of sexual assault, said Heath McAllister, 41, who is the middle of McAllister’s three children. Norm McAllister, who was suspended from the Senate by colleagues in January, is innocent, his son said.

The sexual relationships happened in 2014, after Norm McAllister’s wife died, his son said. Lena McAllister, a first-grade teacher, died of cancer at age 61 in September 2013.

“He was a lonely man,” Heath McAllister said. “He had consensual sex after my mom passed away with two women that he thought were — not necessarily friends, but they’re at least decent acquaintances.”

The younger of the two women was 19 at the time, Heath McAllister said, not 16, as she alleged in court in June. He said the relationship was mutual, though he acknowledged that some might be "disgusted" that his father was 63 and she was 19.

Norm McAllister was charged in May 2015 with sexually assaulting two women who had worked on his Highgate goat farm. A judge agreed the cases would be tried separately.

After a day of testimony during the first trial, in June, the first case was dismissed. That’s because the accuser admitted to state prosecutors that she had lied on the stand over a tangential question, her lawyer, Karen Shingler, told Seven Days. She reportedly lied over whether she had kissed another farm worker.

Heath McAllister expressed outrage that the woman faced no legal consequence such as being charged with perjury.

Deputy State’s Attorney Diane Wheeler, who prosecuted the case, said at the time that there had been no discussion of charging the woman with perjury, and that her office could not levy charges because it was involved in the case. Victim advocates have said that filing perjury charges in such a case would make victims in other sexual assault cases fearful of testifying.

Norm McAllister’s attorneys never made it clear during the first trial whether their client would admit having sex with the woman. He never took the stand.

Heath McAllister said the accuser in the upcoming trial levied allegations because she couldn’t come up with the rent to pay for the trailer where she lived on his father’s property.

He said his father has to sell off property to pay his legal bills. Heath McAllister said his sister and her family will be forced to move because of the sale.

Norm McAllister potentially faces evidence in the upcoming trial that didn’t exist in the last one. State police recounted in court papers a telephone conversation they recorded between Norm McAllister and the accuser in the looming trial just before his arrest last spring.

“I knew I was forcing you to do something you didn’t want to do,” Norm McAllister is quoted in a police affidavit as telling the woman in the recorded conversation. “... I knew that you didn’t really want to do that.”

His son said the conversation was misleading. “If you take it all completely out of context just for what it is, it sounds horrible,” he said. “If you’ve had a relationship with somebody and you trust them and you start talking about different things … It can sound terrible … Did my dad talk like a pig? Sure. I don’t know how many men have.”

McArthur declined to comment as he left court Monday about whether he will seek to have that recorded conversation quashed.

Wheeler said the alleged victim in the second case was ready to testify. She also said that she didn’t expect the dismissal of the first case to affect the second.

Update, July 21, 2016, at 5 p.m.: A quote from Heath McAllister in a previous version of this story is now paraphrased.