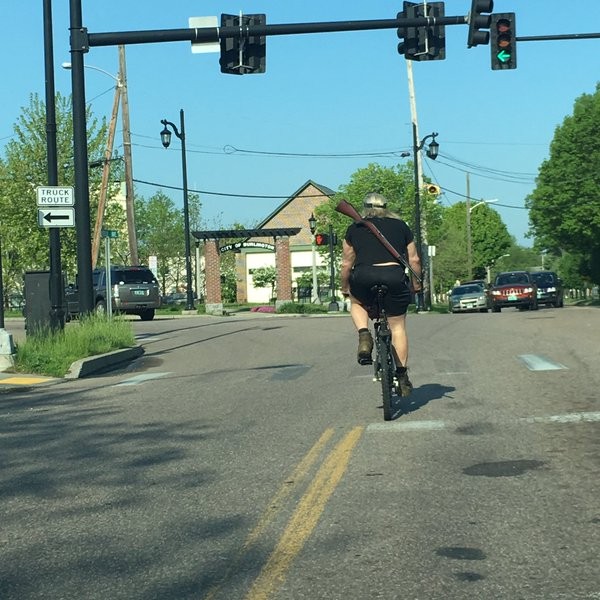 Burlington residents flooded police with phone calls in recent weeks to report a man was bicycling with a rifle slung over his shoulder. Officers who tried to talk to him found him to be "incoherent," and he insisted that laws do not apply to him, according to court documents.

"A man with mental health issues riding around the city on a bike with an unconcealed rifle and ammunition makes people nervous, because it should," Burlington Police Chief Brandon del Pozo said.

For weeks, Burlington police say, they were forced to leave Malcolm Tanner, 52, alone, because he did not seem to be breaking any laws. Wednesday, with the help of federal authorities, he was finally arrested.

Police had repeatedly approached Tanner, who was living in a homeless encampment in woods in the Old North End but does not appear to have any significant local ties.

"During these interactions with the defendant, his demeanor and responses indicated an inability to maintain a consistent stream of thought," Assistant U.S. Attorney Jonathan Ophardt wrote in a filing in U.S. District Court in Burlington. "In addition, Tanner made multiple incoherent statements indicating potential irrational fears of persecution, and voiced a belief that federal laws do not apply to him."

Burlington resident Ralph Grenon had made several similar comments to police officers. He eventually engaged in a standoff that ended with an officer shooting him to death when he lunged at police with two large knives.

But there was nothing police could immediately do with Tanner, del Pozo said.

Any citizen is legally allowed to carry a firearm, either openly or concealed, in Vermont. And Tanner hadn't threatened anyone or committed any crimes, as far as police knew. The records available to Burlington police showed he did not have any felony convictions in Vermont, del Pozo said.

Police didn't try to get Tanner evaluated for mental health problems, thinking that would be fruitless, del Pozo said. State law requires that someone be deemed an imminent danger to themselves or others to be treated against their will. And that standard, experts say, is generally a very high bar to clear.

City residents kept calling police. Dan Barnes shot a photo of a man with a rifle biking. It was circulated widely on social media, and Seven Days published it as a Tweet of the Week on May 25. Del Pozo confirmed Thursday that the man in the photo is Tanner.

Some people accused police of racial bias, del Pozo said, arguing that if a black man had been seen around the city with a rifle, police would have taken more decisive action. Tanner is white.

"I found that very aggravating. The law is the law and we were trying, " del Pozo said. "This had nothing to do with skin color and everything to do with Vermont's gun laws and mental health regulations. We had to tell people, 'On its face, this is legal conduct, but we're looking into it.' People were very frustrated by calling police about a man with a gun and having a dispatcher say, 'Until we know more, there's nothing we can do.'"

Burlington police eventually turned to the Bureau of Alcohol, Tobacco, Firearms and Explosives, which handles federal firearms crimes. ATF agents learned that Tanner had felony convictions for theft and drug dealing in New Hampshire. Federal prosecutors filed a charge accusing Tanner of being a felon in possession of a firearm.

Police arrested Tanner on Wednesday morning near his encampment. He surrendered peacefully. Tanner was being held in jail without bail pending a hearing Friday in U.S. District Court.

If not for his previous convictions, Tanner could still be riding around the city with a weapon at the ready. When federal agents inspected Tanner's rifle — which they described as a .22-caliber semiautomatic — they found its magazine held seven rounds.