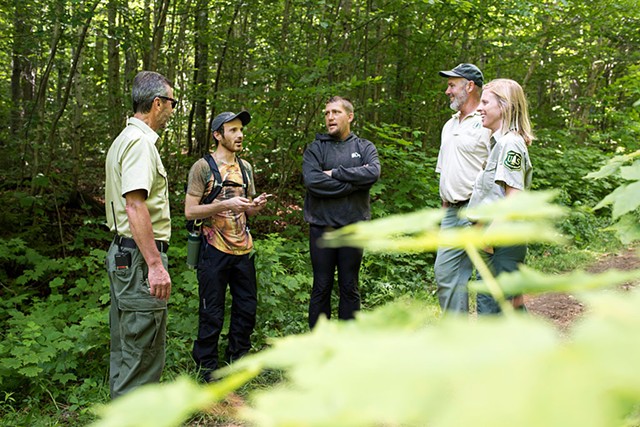 The American Civil Liberties Union of Vermont is criticizing the U.S. Forest Service and law enforcement agencies for what it calls overzealous policing of the Rainbow Family of Living Light's gathering in the Green Mountain National Forest.

The ACLU says it has been inundated with complaints from Rainbow campers that police are running checkpoint-like stops, detaining people for minor infractions and subjecting them to drug searches without reasonable suspicion.

"We've also been told that people are pressured to consent to searches of their person, vehicle or belongings; that they are subjected to abusive and prolonged questioning by state, local and federal law enforcement; and that citations ... for petty federal offenses on public federal lands are being issued," the ACLU said in a statement.

The ACLU's comments come a day after Gov. Peter Shumlin called on law enforcement to ease up on the participants at the gathering in Mount Tabor. The gathering is expected to draw 10,000 to 20,000 people by the time it culminates on July 4.

The Forest Service says it has issued 163 warnings and 144 violation notices, mostly for traffic and drug crimes, since the gathering began two weeks ago. The agency budgets $500,000 to police the event, which is held annually on Forest Service sites across the country. The Rainbows are a loose-knit collection of people who promote intentional communities and nonviolence.

In addition to the Forest Service, the Vermont State Police, the Rutland County Sheriff's Department, and the Manchester and Bennington police departments have also worked at the gathering.

Forest Service spokesman Ethan Ready did not immediately respond to requests for comment.

This reporter spent time at the camp site last week and observed some light marijuana use, but no acts of violence or serious disorder.

Police kept a constant presence at the entrance to the camp, ranging from three officers to almost a dozen. At one point, a team of eight police officers walked in formation along a three-mile trail through the gathering.