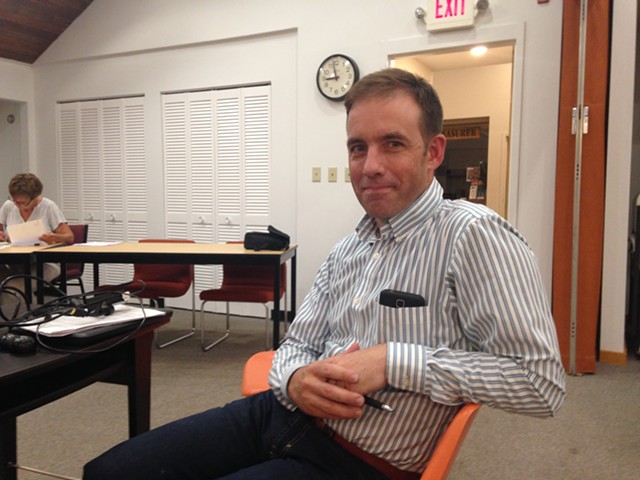 Burlington-based developer Redstone has a contract to buy one of the most prominent historic buildings in downtown Winooski.

The company plans to buy the distinctive 19th-century red-brick Winooski Block building atop the city's roundabout, home to Scout & Co. and other businesses. Redstone also has a contract to buy two smaller residential properties a few doors down at 33 and 41 East Allen Street.

The acquisitions would add to the company's growing real estate portfolio in downtown Winooski.

Redstone recently announced plans for an entertainment venue called the Strand, which would be built across Main Street from the Winooski Block building. On Tuesday, the Winooski City Council came out in support of that proposal.

The council also voted Tuesday to allow Redstone to pursue downtown tax credits for the Winooski Block, which needs work. The company plans to preserve the structure and to keep the current mix of commercial tenants on the first floor and 26 apartments on the upper floors.

Its exterior was renovated in 1981 but the interior needs some attention, according to Bill Niquette, senior associate at Redstone, who spoke at the meeting Tuesday. "There are a lot of things to fix," he said.

In a unanimous decision Tuesday, the council gave support for a development agreement with Redstone on the Strand project. The vote gives Mayor Seth Leonard authority to sign the final agreement after city lawyers review it.

The Strand, named after a movie theater that burned down on the block in the 1950s, would be at 66 Main Street. The $20 million project would house a 1,500-person performance hall, offices, restaurants and possibly a brew pub.

The shuttered drive-through bank now on the site would be demolished.

Under the agreement, Redstone would be allowed to realign sections of West Allen and Main streets. A plaza along West Allen would include sculpted curving benches, new trees and space for outdoor restaurant seating.

The Strand would be built adjacent to Winooski City Hall, which is at 27 West Allen.

The council unanimously agreed to apply for a state sales tax credit for Redstone and the Strand project. The credit could return an estimated $350,000 to Redstone, money that would be used to build wider sidewalks and terraces.

Parking remains an issue. The Strand will have no on-site parking, and during concerts will rely heavily on the city's 920-space parking garage on Winooski Falls Way. Many of those spaces are leased during the day. But most of them are open for public use at night, and the agreement pushes the city to keep it that way.

At least 550 parking spaces in the lot must remain open for public use from 6 p.m. to 7 a.m. during weekdays or at any time on weekends, under the terms of the agreement.

The project has already won approval from the city development review board. Leonard said he reached out to immediate neighbors and found many of them approve of the Strand proposal.