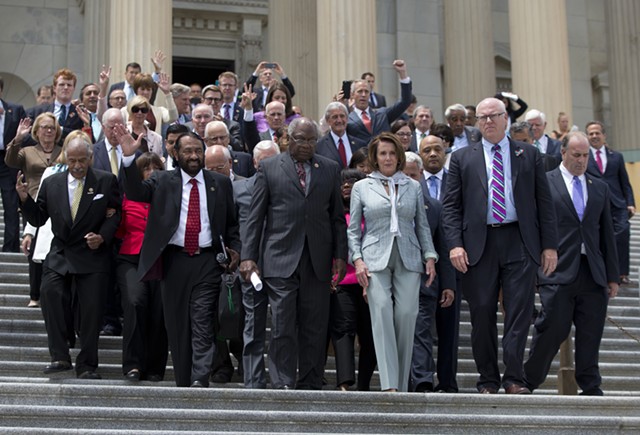 Congressional Democrats didn't get the gun-control votes they demanded. But during a 25-hour sit-in on the floor of the U.S. House, they got something else: eyeballs.

"We focused attention on the obligation of Congress to act," said U.S. Rep. Peter Welch (D-Vt.), who joined his colleagues for much of the protest. "The response I got on social media from Vermonters — the calls to our office — has been greater on this event than anything else since I've served in Congress. And it's been overwhelmingly positive."

Democrats took control of the House floor late Wednesday morning and did not leave until roughly 1 p.m. Thursday. They stalled all congressional action until late Wednesday night, when House Speaker Paul Ryan (R-Wis.) and Republican leaders reconvened to push through a major spending bill and other legislation. GOP lawmakers then left town — despite chants of "no bill, no break!" — for their annual Independence Day recess.

Welch said he remained on the floor through much of the night, taking an hourlong break at 11:30 p.m. and a 2.5-hour break at 5 a.m. to return to his nearby apartment for a brief nap. During his walk home, Welch said he was struck by the sight of construction workers showing up in the predawn hours to work on the Capitol dome restoration project. He called it "an interesting contrast" to what he said was a Congress not doing its job.

Following last week's mass shooting in Orlando, Fla., House Democrats had hoped to cajole their Republican colleagues into scheduling votes on two bills: one to prevent those on terrorist watch lists from buying guns and another to require all gun purchasers to undergo federal background checks. Welch said he was "disappointed" they failed to achieve that goal, but said he understood his colleagues' decision to end the protest.

"We were willing to stay and didn't want to break until we had [votes on the bills]. But the reality of the way this institution works is the speaker has the gavel," the sleep-deprived congressman said Thursday afternoon. "We were willing to stay. He decided to flee — and close the shop two days before we were supposed to get out of here."

He added, "This will continue."


Because the House was out of session for much of the protest, Democratic members were able to speak at length in an informal manner. Welch said that created a sense of "solidarity" between colleagues, who shared personal stories of gun violence in their communities. By rule, House video cameras operate only when the body is in session, so those remarks were broadcast live via shaky cellphone videos taken by lawmakers themselves.

Welch said he found it particularly inspiring to join Rep. John Lewis (D-Ga.), a leader in the civil rights movement, for the protest.

"It was, I think, very powerful for all the members that John Lewis really became the leader, because he is, I would say, the most respected member of Congress," Welch said. "It reminded me a lot of the best of America."