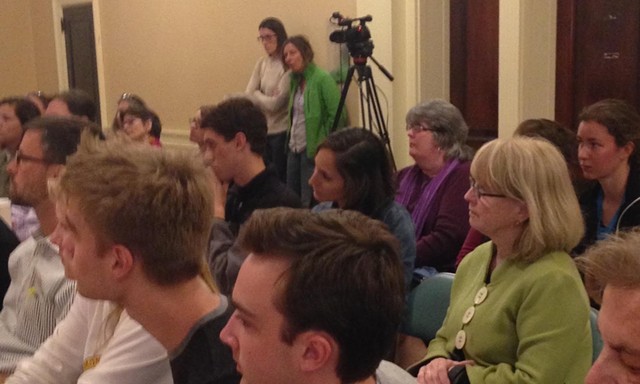 The principal of Burlington High School authorized "thousands of dollars" in payments from student account funds without proper documentation, according to Burlington School District director of finance Nathan Lavery.

Revenue from student parking permits was improperly used to buy professional baseball tickets for employees, he wrote in a June 13 memo to the Burlington School Board. And other payments to high school staff appear to meet the definition of wages rather than reimbursements, and should have been made via payroll — not student activity accounts, Lavery wrote.

The memo never mentions longtime BHS principal Amy Mellencamp by name, but singles her out by title and says she failed to properly manage student account funds. Details on the dollar amounts are not specified. Seven Days has filed a public records request seeking the full report on student accounts.

Mellencamp strongly disagrees with Lavery's conclusions and said she knew nothing about the memo until it was presented to the school board Tuesday night.

"This is the case of his never asking questions of administrators, including myself, and just going ahead and making assumptions without gaining appropriate information," Mellencamp said via email.

Checks and balances are built into the system, she added. "We have tight accounting practices and are proud of our stewardship of these funds on behalf of the students, parents, teachers and community members involved."

Mellencamp has led BHS for 17 years, and is serving her final month there. She's been reassigned under a controversial principal shuffle announced by superintendent of schools Yaw Obeng in May. She becomes principal of C.P. Smith Elementary School July 1.

Lavery's memo details problems with student accounts throughout the district. But it flagged Burlington High School for more serious issues.

Practices at BHS "circumvent procedures established to control spending by utilizing student activity accounts to pay for substantial reimbursements to employees," the memo reads. "This end-run around the established procedures is compounded by the fact that thousands of dollars of reimbursements have been paid without adequate backup documentation, calling into question the propriety of these reimbursements."

The memo went on to say: "The only approver on these payments is the principal, who repeatedly failed to ensure the presence of sufficient documentation prior to authorizing payment. In other instances, documentation that is available reflects inappropriate spending. For example, funds generated through parking fees assessed to students were used to purchase professional baseball tickets for staff."

Obeng, Lavery and school board chair Mark Porter did not respond to messages seeking comment Thursday. Vice chair Stephanie Seguino issued this statement: "We are of course concerned with any areas in which there are deficiencies in financial controls and practices. The board is committed to establishing sound financial management practices and to improving the community's confidence in how taxpayer dollars for education are used."

The audit has been helpful to the business office by identifying methods for enhanced oversight of student accounts, and the board looks forward to the implementation of the auditor's recommendations, Seguino said.

Mellencamp and Obeng butted heads earlier this year. She publicly challenged Obeng's plans to cut high school courses and teachers in response to declining enrollment and a budget gap. Many parents defended Mellencamp and criticized her reassignment as punitive. Mellencamp said she had wanted to spend her last year at the high school before retiring next June. But she also pledged to be a team player.

The student account problem is one of several financial issues Lavery has attempted to tackle. He joined the district in 2014 after deficits and overspending hit a crisis point and led to the exodus of former superintendent Jeanne Collins and other administrators, including the business manager.

Annual audits of the school district in fiscal 2014 and 2015 noted problems with the use and management of student account funds. Outside auditors recommended a thorough review of accounts, new procedures and more oversight by the district's central business office.

Outside auditors visited six district schools on May 19 and 20. Lavery summarized their initial findings in the memo to the board this week and said all the schools "evidenced practices that must be changed," with BHS as the school that had the "most problems."

The auditors completed an in-depth review that Lavery is now examining, according the memo.

Another problem cited: High school athletics gate receipts are being deposited into BHS student activity funds, but school district revenue should go into the district's general fund, according to Lavery.

"We believe that this practice has been longstanding and may be the result of an 'understanding' between the principal and prior central office administrators; however it is not an appropriate arrangement," Lavery wrote.

Mellencamp said the student accounts have nothing to do with the school budget paid for by taxpayers. The accounts are funded from donations, ticket sales and other revenue that come in for clubs and activities, sports teams, field trips, scholarships, special events and activities, she said.

"Given the tremendous work and generosity of students, parents, community members and teachers, we are able to support school activities that add to the life, culture, and spirit of BHS," she said.

On Friday, Mellencamp confirmed via email that BHS purchased 40 Red Sox tickets for a June 23 school employee team-building outing. The bleacher tickets were purchased in a discount block at $12.25 each for a total cost of $490, according to Mellencamp. Student parking fee revenue was used to buy the tickets, with the understanding that employees will pay for their tickets and reimburse the account, she wrote.

"The arrangement is like other events whose initial costs are covered by later ticket sales, such as with the prom, field trips, and many other students events and activities," Mellencamp wrote.

She again defended her management of student accounts. "I can say that I have not authorized any reimbursements for any expenses without proper receipts or documentation. During my time at the high school, there have been at least five different superintendents, and the monthly reports and annual district audits completed never revealed or raised any of these issues, nor were concerns presented to me during those 17 years. "