At His Burlington Home, Sanders and Supporters Plot Next Steps | Off Message

At His Burlington Home, Sanders and Supporters Plot Next Steps

Speaking Sunday outside his Burlington home, Sen. Bernie Sanders (I-Vt.) vowed to take his “campaign for transforming the Democratic Party” to its convention this July in Philadelphia. But he wouldn’t quite say whether he would continue seeking the party’s presidential nomination.

“Well, we are going to take our campaign to the convention with the full understanding that we’re very good in arithmetic and that we know who has received the most votes up until now,” he told reporters gathered across the sidewalk from him.

Sanders made the remarks after meeting for several hours in his New North End home with nearly two dozen top supporters. The group, which included five other members of Congress and several prominent activists, emerged from the house at 5 p.m., prompting cheers from neighbors standing across the street. Sanders, accompanied by his wife, Jane O’Meara Sanders, shouted to the locals that the street “hasn’t had this many people in a long time.”

In his brief remarks to reporters, the senator called Sunday’s meeting “very exciting and productive” and said it focused on figuring out how to convert his presidential campaign into a lasting progressive movement. Echoing the words of former governor Howard Dean, he said it would require a “50-state strategy” that encouraged citizens to run for office and “demand that government starts listening to the needs of ordinary people, rather than just wealthy campaign contributors.” 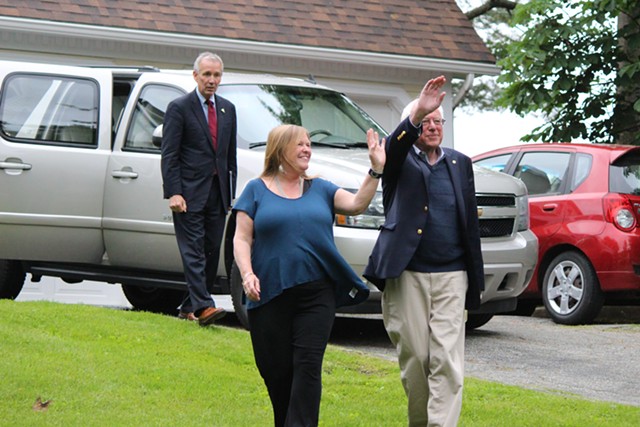 “What today’s discussion was about was not only comparing notes about this campaign, but was primarily talking about the future — and understanding that election days come and go, but political revolutions are not dependent upon election days,” he said. “That this country faces enormous crises and that we together are going to do our best to transform this country by bringing millions and millions of people into the political process.”

Sanders vowed again to help defeat presumptive Republican presidential nominee Donald Trump, whom he accused of “running a campaign based on bigotry.”

“We are united in saying that Donald Trump will not become president of the United States and that we will do everything we can to prevent that,” he said.

The senator only briefly mentioned his Democratic rival, former secretary of state Hillary Clinton, who declared herself the party’s presidential nominee last Tuesday night after winning the California primary. He said he planned to meet with her this Tuesday evening after the Washington, D.C., primary, in which he said he “hope[d] to do well.”

“Look forward to that meeting,” he said. “And look forward to hearing what the secretary has to say about some of the most important issues that impact the lives of millions of people who have supported our campaign.” Sanders’ remarks began on a somber note, as he called the fatal shooting of at least 50 people Sunday morning at an Orlando nightclub “an unbelievably horrific mass murder.”

“It goes without saying, in my mind, that ISIS must be destroyed and that we’ve got to do everything humanly possible to prevent these types of tragedies from occurring,” he said.

After speaking for just seven minutes, Sanders crossed the street to shake hands with his neighbors and pose for photos. As he walked their way, many chanted, “Bernie! Bernie! Bernie!” He later retreated to his house, accompanied by campaign aides.

Attendees were instructed not to speak to the press and were whisked away to waiting vans after the meeting concluded.

“We just had a good conversation about a lot of ideas and how we move forward,” said Garcia, a member of Illinois’ Cook County Board of Commissioners, before a Sanders staffer cut off an interview.

“He sought out our advice, and it was a good meeting,” Ellison said as he walked down the sidewalk. “We are fixed on getting people to run for office at every level and making sure that we have this revitalization of democracy.”

Asked if he planned to vote for Clinton at the convention, Ellison said, “You know what? I’ll holler at you in a little while.”