As afternoon turned into evening Thursday, 35 members of Vermont's House Republican caucus gathered around a conference table a block from the Statehouse to plot their next move.

They had spent much of the day trying in vain to override Gov. Peter Shumlin's veto of a renewable energy siting bill. They had stood together to block consideration of a substitute measure, which proponents promised merely corrected technical problems in the vetoed bill. But now the minority party had reached an impasse: While they had the votes to delay the substitute measure's passage, they didn't have the votes to stop it.

Perched at the head of the conference table, House Minority Leader Don Turner (R-Milton) suddenly seemed at a loss for words. The end game, he said, was to override the governor's veto — a result, he acknowledged, that would never come to pass.

But his caucus wasn't quite ready to quit spinning its wheels. Its members marched back into the Statehouse at the dinner hour, pledging to fight on — for days, if necessary. Barely two hours later, they caved and allowed the substitute to pass.

Precisely what Turner and his fellow House Republicans were fighting for — or against — was never quite clear. When the bill in question passed in May, most of them had supported S.230, which was designed to give municipalities more control over the siting of renewable energy projects and to limit the noise that wind turbines could emit. Few, if any, House Republicans could explain Thursday what was so objectionable about the substitute, S.260, which Shumlin and his Democratic allies now proposed.

"S.230 was a compromised bill. We only supported it because it was better than nothing — and we spent the whole session negotiating," Turner said in an interview earlier that afternoon. "We're not compromising further."

But Turner couldn't quite say how S.260 differed, substantively, from the bill he and his fellow Republicans thought they had been voting for in May. Asked several times to identify what was so problematic about the legislative language, Turner demurred — relying instead on a procedural argument.

"I believe that the integrity of the legislative process is being undermined by what they're doing," he said, explaining that when a governor vetoes a bill, the legislature should return to Montpelier only to override or sustain the veto — not pass new legislation to fix it.

For some members of Turner's caucus, their opposition appeared to come down to a matter of trust. House Republicans repeatedly suggested that the governor was acting as a puppet of renewable energy developer David Blittersdorf and his cronies, alleging that S.260 included some secret provision that would enrich the state's clean-energy mafia. None could offer a lick of evidence to back up such assertions.

"I don't care what they say to me. Quite frankly, I don't believe what they say is in this new bill. I can't trust anybody at this point!" Rep. Janssen Willhoit (R-St. Johnsbury) shouted at a mid-afternoon caucus meeting. "So I'll be damned if I'm going to be lied to again! It's not gonna happen."

Turner, who is typically mild-mannered in public, echoed the sentiment with colorful language of his own.

"People are fed up with government because of shit like this!" he told his members. 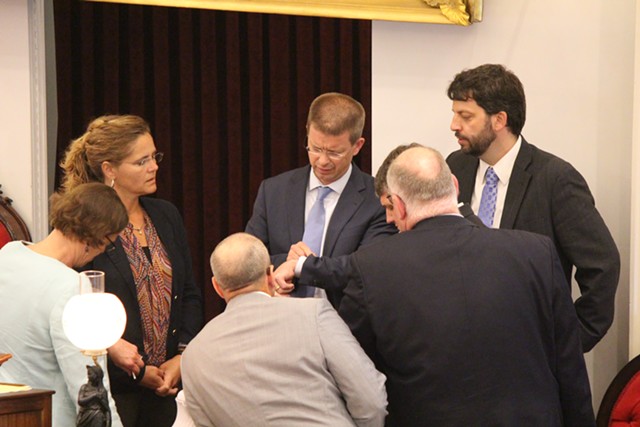 Perhaps, but House Republicans appeared to be risking an awful lot to make a process point. Though passing S.230 had been "better than nothing" in May, Turner was now saying he was perfectly willing to scuttle new limits on renewable energy siting, if he failed to override Shumlin's veto — and walk away empty-handed.

"I think that there is some political gamesmanship going on," House Speaker Shap Smith (D-Morristown) suggested.

Indeed, though Turner denied it, it was hard to escape the conclusion that House Republicans desperately wanted the siting bill to go down in flames, so that they could blame Democrats and campaign on the issue during this fall's election season.

They missed their chance for a number of reasons:

1. They simply didn't have the numbers. To expedite passage of the substitute measure, House Democrats had to suspend the rules several times — a move that required three-quarters of those present to vote in favor. House Republicans had enough votes to block such suspensions, but the Democrats could simply wait them out — and remain in Montpelier for as many days as it would take to pass the bill under regular order.

2. They're not very good at playing chicken. When Smith made clear Thursday afternoon that he was willing to wait them out, House Republicans failed to test his resolve. It's hard to imagine that Smith, who is running for lieutenant governor, would have relished staying in the Statehouse into next week, costing taxpayers $60,000 a day to keep the legislature in session. We'll never know. As soon as Smith issued his threat, Turner told his caucus he thought it prudent to call it quits and go home. That's not how you win.

3. Senate Republicans didn't have their back. House Republican leaders dug in early, holding a press conference Tuesday vowing to fight Shumlin's veto, but their Senate counterparts largely held their fire. Several — Sens. Bill Doyle (R-Washington), Kevin Mullin (R-Rutland), Helen Riehle (R-Chittenden) and Richard Westman (R-Lamoille) — were persuaded that the substitute measure would achieve what they supported in May and voted with their Democratic colleagues, 22 to 7, to suspend the rules. When the underlying bill, S.260, came up for a vote, it passed the Senate 27 to 2, with just Sens. Dustin Degree (R-Franklin) and Phil Baruth (D-Chittenden) voting in opposition. Because an override of S.230 had to originate in the Senate, the House was left with two options: S.260 or nothing.

So why didn't Senate Republicans stand with their House brethren? For one thing, senators of all three parties rarely vote in an entirely partisan fashion. They listened attentively Thursday morning as a legislative lawyer, Aaron Adler, walked the entire body through the differences — and similarities — between the two bills.

Referring to a memo Adler had prepared, Mullin asked a simple question: "Is there any other change, whatsoever, to S.230 in the language of S.260, other than what is on this document?"

When Senate Republicans gathered in the coatroom several minutes later to settle on a caucus position, Mullin sounded persuaded.

"At this point, somebody has to explain to me what we're trying to fight for if this truly is a clarification," he said. "Otherwise, I think we're spinning our wheels here."

After 10 minutes of debate, Sen. Joe Benning (R-Caledonia), the Republican minority leader, tried to wrap up the discussion and determine whether his colleagues supported the substitute measure.

"The decision really boils down to whether we want something or nothing," he said, rubbing his eyes with both hands.

"Well, I want something, because, you know, my other hat is on the city council," said Riehle, who chairs South Burlington's governing body. "As a council and planning commission, we'd like to have some say. I think this is the only bill that gives us that kind of standing. And that's really important to me."


In the end, Riehle and her small band of Senate Republican allies got the "something" they wanted. Turner and his House Republican caucus didn't get the "nothing" they appeared to crave.

Whether voters this fall reward one approach or the other — or simply don't care — remains to be seen.