By 8:40 p.m., both chambers voted to pass the revised bill — in a 27-2 vote in the Senate and by a voice vote in the House. Shumlin quickly sent word that he would sign the new version.

The Senate also voted 20-8 to sustain the governor’s veto of the original bill, a move that left the House without the chance to override the veto.

Thursday’s session was triggered when Shumlin vetoed the bill on Monday, a month after lawmakers adjourned for the year. The bill was designed to give communities more say in the siting of renewable energy projects. Shumlin argued that the bill had several legal flaws, including one that would have halted development of wind projects by inadvertently declaring turbine sound an emergency health issue.

Legislative lawyers disagreed with Shumlin’s assessment, saying the bill could have been enacted as written.

Thursday’s standoff followed a yearlong battle over a bill that is supposed to give communities more input into where solar and wind projects are located. The issue has long pitted renewable energy developers against those who find such projects obtrusive neighbors.

Some of those neighbors filled the Statehouse hallways Thursday, as they did throughout the legislative session, wearing neon green vests to call attention to their concerns. As senators met Thursday morning for their first debate of the day, 90 onlookers and senators crammed into a Statehouse meeting room.

Monique and Steve Thurston of Ferrisburgh were among them. She is running for a House seat in this year’s election, driven by her concern over wind development. The Thurstons wanted lawmakers to override the governor’s veto Thursday, and prefer stricter wind turbine sound levels.

Again and again throughout the day, the House and Senate took turns gaveling into session, only to recess and await action that never came from the other chamber. “I have the fear that I’m going to end up with the nickname ‘recess,’ between ‘John’ and ‘Campbell,’” said Senate President Pro Tempore John Campbell (D-Windsor), as he asked for one last recess at 8:15 p.m.

By early evening it had become clear that any hope of overriding the veto had long evaporated. House Republicans, outgunned by the Democratic majority, cried uncle and agreed finally to suspend rules to pass the revised bill. A three-quarters majority vote is needed to suspend rules. Twice, Republicans blocked rule-suspension efforts.

“We wanted to override the governor’s veto,” House Minority Leader Don Turner (R-Milton) told his members in a meeting at about 8 p.m. “We’re not going get that opportunity.”

“I think we should do what George Aiken did in the Vietnam War, which is to declare victory and go home,” said Rep. Kurt Wright (R-Burlington), encouraging House Republicans to end a standoff that could have gone on for days.

Republicans could have gotten the same result at least eight hours earlier, but balked over what Turner described as principle. Republicans didn’t think Shumlin needed to veto the bill and worried that the last-minute fix could contain well-disguised wording to weaken the bill, in developers’ favor.

As Sen. Joe Benning (R-Caledonia) brokered a late-evening deal to end the stalemate, he still worried that the revised version was secretly designed to allow specific wind projects to go forward. “It better not,” he muttered as he lined up votes.

“Where was the legislative process?” Turner asked on the House floor. “You show up and make up the rules as you go. To me, it’s unbelievable.”

Some Democrats also expressed frustration over the governor’s veto, but argued that the fix was merely technical and straightforward. “Nothing about it stands out as different,” said Sen. Tim Ashe (D/P-Chittenden). “We shouldn’t let the frustration of why we’re here cloud our judgment.” 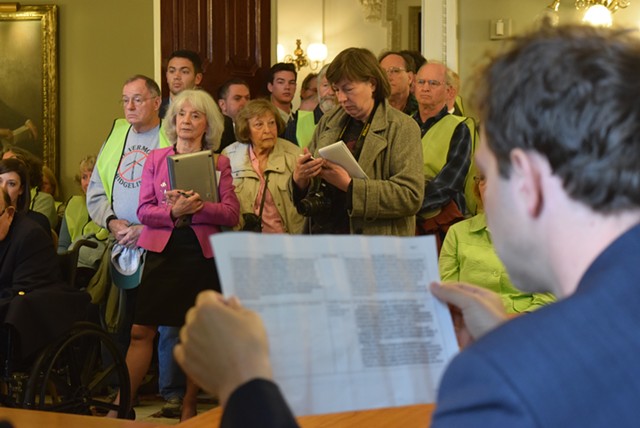 Legislative lawyer Aaron Adler told senators that the revised version was neither stronger nor weaker. Instead, it cleared up legislative intent, he said.

“I don’t think any of us want to go home with no bill,” said Sen. Becca Balint (D-Windham), encouraging fellow senators to support the fix.

At 9:12 p.m., they finally did go home with a bill. Some also took with them an election-year issue.

“Let’s take this example home and tell our constituents this is why we need balance,” said Sen. Dustin Degree (R-Franklin). The revised bill will give wind and solar critics a little more leverage in siting energy projects, but they want more, he said. “What they’ve seen is we need balance.”