Slideshow Photos From Bernie Sanders' Homecoming at the Burlington Airport 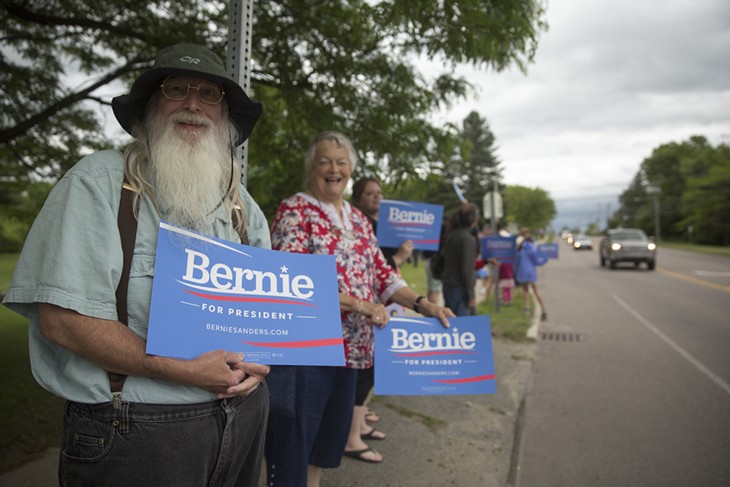 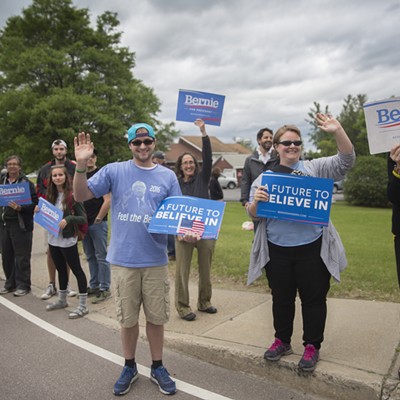 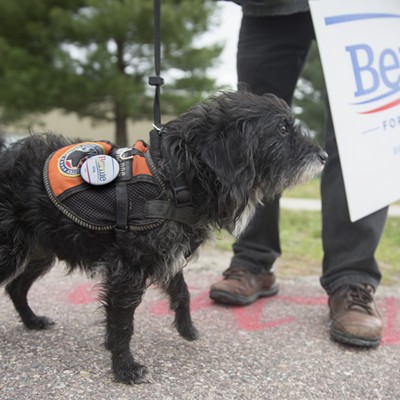 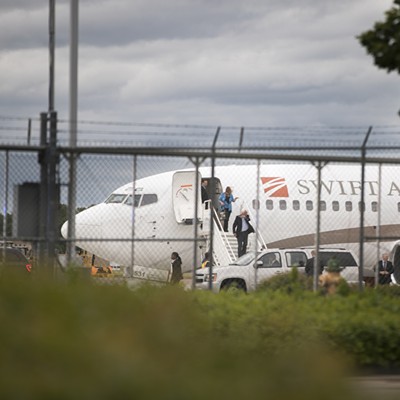 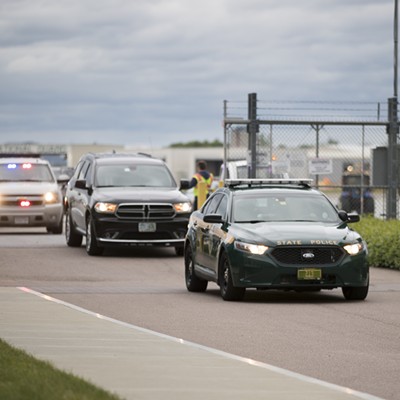 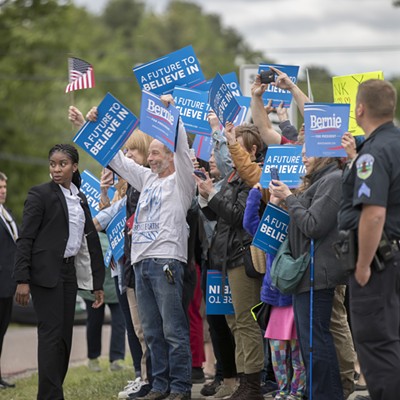 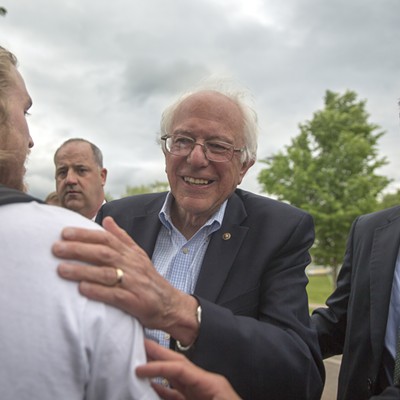 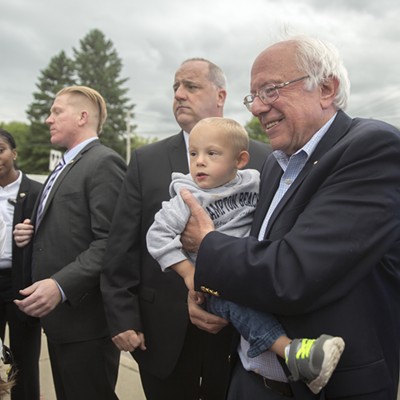 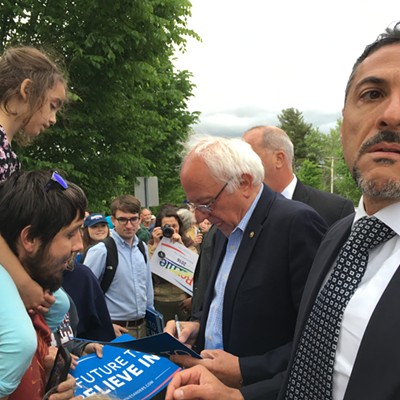 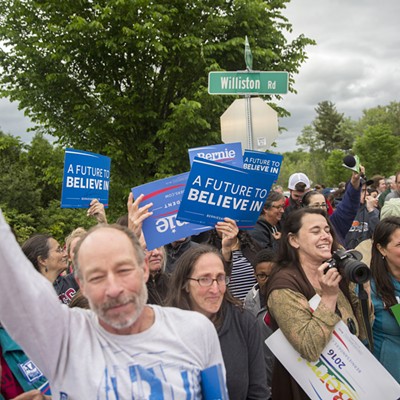 “I just want to welcome Bernie home,” the Burlington graduate student said. “So he knows that he’s loved and missed — and to tell him to keep on going to the convention.” 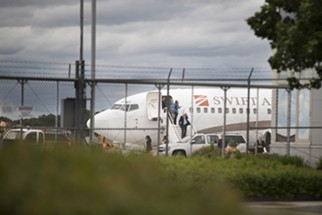 After losing California on Tuesday and watching rival Hillary Clinton declare herself the Democratic presidential nominee, Sanders faced pressure Wednesday from top Democrats who urged him to stand down. But Ament and the roughly 80 other supporters who lined Williston Road seemed inclined to see Sanders stick it out.

“The superdelegates haven’t voted yet,” Ament said. “It’s obviously very steep, but if you believe in democracy you wait until everyone’s voted.” 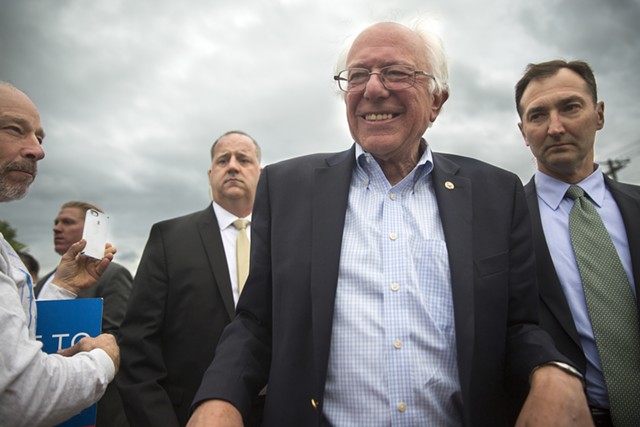 After landing at Burlington International Airport that evening, he bypassed a horde of reporters gathered outside the Heritage Aviation terminal and focused his attention instead on a group of supporters standing across the street. He shook hands and posed for photos, then declared, “Alright, go home. It’s cold!”

The presidential candidate and his wife, Jane O’Meara Sanders, hopped in a gray Suburban and traveled a short distance down Aviation Avenue to the intersection where Ament had been waving his sign. The two, surrounded by Secret Service agents, hopped out again and worked their way down the line of supporters, addressing each individually. Then they drove off into the night. 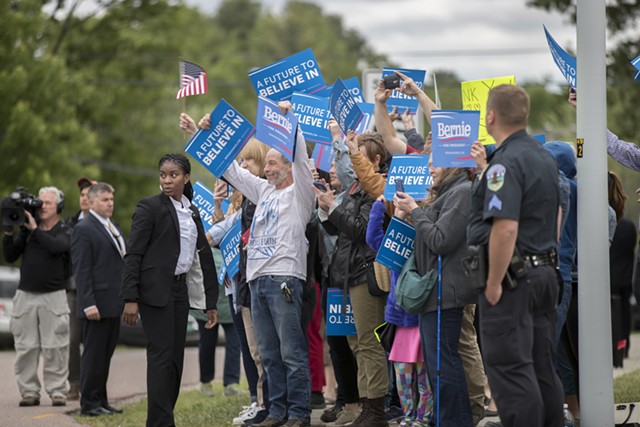 Speaking late Tuesday in California, Sanders vowed to fight on through next week’s primary in D.C. — the final election in the Democratic nominating contest. But Obama is expected to join other party leaders in persuading Sanders to clear a path for Clinton. Several of the Vermonter’s top congressional allies, including Sen. Jeff Merkley (D-Ore.) and Rep. Raúl Grijalva (D-Ariz.), made clear Wednesday that they thought the race had come to an end. 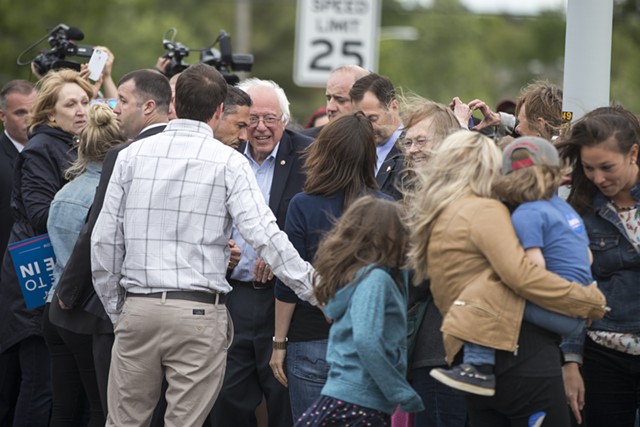 Kaitlin Abare disagreed. The Seattle project manager had traveled home to Burlington to visit her mother, retired teacher Diane Abare, and the two decided to take part in the Sanders rally. They stood near Ament, holding a cardboard sign featuring the words, “Welcome home!”

“We think he still needs to continue pushing his platform at the convention. He’s had a lot of supporters putting time, effort and votes in — and they should be represented at the convention,” Kaitlin Abare said. “There’s always hope.”

Though many observers hailed Clinton’s success as a milestone for gender equity, Abare appeared nonplussed.

“I want the best nominee — someone who represents what I believe in — and I don’t care if they’re a male or a female,” she said. 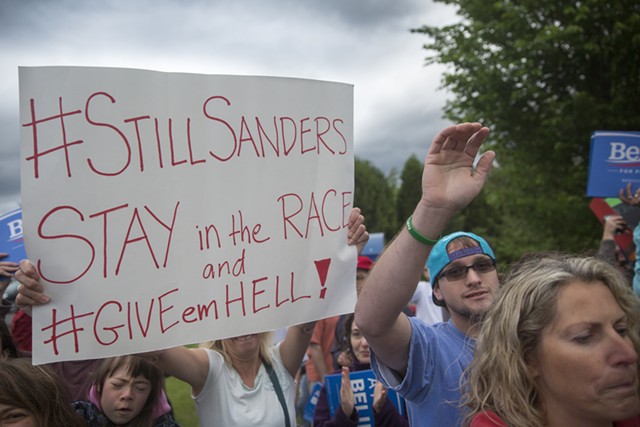 Burlington resident Jennifer Tornabe, who attended the event with her two children and her parents, said she wouldn’t support Trump or Clinton.

“I can’t vote for anyone else; I’m probably going to write [Sanders’] name in,” she said. “I don’t want the lesser of two evils.”