Suspects in Killing of Transgender Man Arrested in San Diego 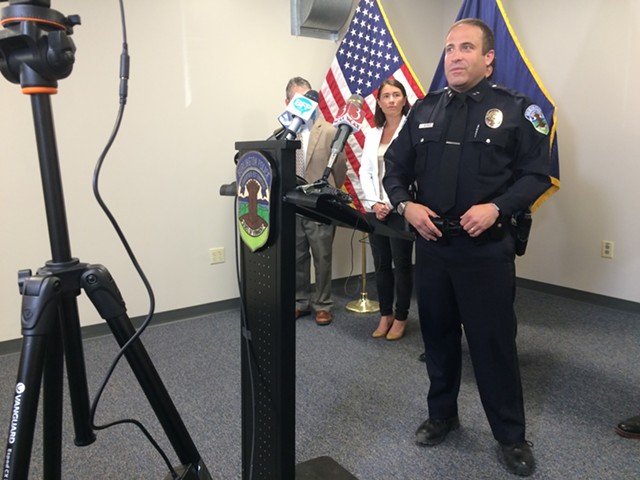 Four suspects in the fatal beating of a transgender man in a Burlington homeless encampment were arrested Thursday night in San Diego, police said Friday morning.

Vermont residents Erik Averill, 21, Jordan Paul, 21, Myia Barber, 22, and Allison Gee, 25, were found on a beach in the southern California city and will be extradited to Vermont, according to Burlington Police Chief Brandon del Pozo.

While police initially suspected that the May 22 killing of Amos Beede, 38, was fueled by bias, detectives now believe he was killed as part of an ongoing feud between two encampments off Pine Street, del Pozo said.

Beede, who lived in Milton but often visited the encampments, recently dumped bottles of urine into Averill's tent. Averill allegedly enlisted the three other suspects to beat Beede in retaliation.

The four suspects used their feet and hands, police said. No weapons were involved. According to the police, there are several witnesses to the killing. Averill had previously assaulted residents of city homeless encampments, del Pozo said.

"That's a crime that takes a lot of intensity, rage and commitment [from] the perpetrators," del Pozo said during a press conference at the department's North Avenue headquarters. "But it's a self-contained fact pattern. We believe it fits a pattern of aggression on transients by Mr. Averill."

Each suspect has been charged with second-degree murder. Beede suffered a subdural hematoma, broken ribs and broken facial bones.

Earlier Thursday, Burlington police had announced that the suspects had been spotted in Roswell, N.M. Paul had family connections there, police said.

Del Pozo said that GPS tracking of one of the suspects' cell phones — combined with information from license plate readers, which scan passing cars and store their locations in a national database — helped authorities track the suspects to New Mexico and California.

Mayor Miro Weinberger said at the press conference that the killing renews concerns about homeless encampments in the city. The camps where the killing occurred will be shut down soon, police said.

"We are a compassionate city, [but] our general position to the encampments is they are unlawful," Weinberger said.

Beede's family members have scheduled a public memorial service to commemorate Beede on Wednesday, June 8 at 6 p.m., at Perkins Pier in Burlington. The family released a statement Thursday through the Pride Center of Vermont saying that his relatives were devastated by his death.

"The Beede family would like everyone to know how much the loss of Amos has affected our family," their statement said. "The horrific, brutal attack that led to his death has had a tremendous impact on our family. We are heartbroken. A big piece of our lives has been ripped away from us way too soon."