Media Note: VPR Cries Foul Over Lisman’s Use of Its Photo in Campaign Flier | Off Message

Media Note: VPR Cries Foul Over Lisman’s Use of Its Photo in Campaign Flier

The flier that Republican gubernatorial candidate Bruce Lisman sent to Vermont Republican voters last week makes prominent use of a photo that his campaign obtained from Vermont Public Radio’s website — without VPR’s permission.

Lisman’s campaign didn’t ask permission to use it, and if it had, VPR would have said no, said John Dillon, the station’s news director.

“It’s outrageous that they felt free to use the photo. This is copyrighted content, and it’s just plain wrong to use other people’s property without permission,” Dillon said. “We’ve never allowed our photos to be used by political campaigns.”

Lisman campaign manager Shawn Shouldice argued the photo was covered under the “fair use” standard in copyright law. 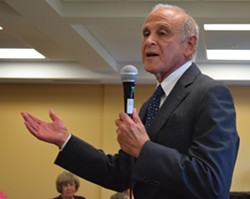 “The photo capturing the close ties between Phil Scott and Peter Shumlin was on the VPR website and in the public domain, therefore fair use,” Shouldice wrote in an email. “Because Shumlin and Scott were so close in policy it is not the only photo or video showing this. Campaigns all over the country have used pictures such as the Shumlin/Scott love-fest in their ads and it has always been considered fair use.”

Whether the Lisman campaign can legally use the photo is not cut and dried, said Peter Kunin, a lawyer with the Burlington firm Downs Rachlin Martin who specializes in copyright law.

“In this particular case, I would say it’s a close call,” he said. Kunin said that if he had been representing Lisman, “I would have suggested they ask for permission.”

The photo is not in the public domain just because it’s online, Kunin said. But federal law allows for the use of copyrighted material under certain “fair use” circumstances.

Such situations are decided on a case-by-case basis, Kunin said, with judges historically issuing inconsistent rulings. “Judges are reluctant to go after political campaigns when they’re using photos of public figures,” he said.

Among the considerations for deciding whether a photo falls under “fair use” are whether the image is being sold commercially and whether its use is harming the value of the original. Lisman is doing neither, Kunin noted.

“If I were a federal judge I would probably decide it’s fair use and the Lisman campaign is not liable for copyright infringement,” Kunin said. But he added, “It’s not a slam dunk.”

VPR employees reviewed the situation carefully and concluded it is not fair use, said Dillon. He said VPR has no plans to sue Lisman’s campaign over the photo, but would like an apology and an assurance that it won’t happen again.

Lisman’s campaign took the flier off its website Wednesday. “Lisman for Vermont intends to fully comply with the law,” Shouldice said. “John Dillon of Vermont Public Radio asked that I take it down. I did so until we have time to fully evaluate their claim.”

The flier, which some Vermont Republicans received in the mail Saturday, prompted an unusually sharp response from Scott at that day’s Republican State Convention in South Burlington. Scott held it up on stage and called it “D.C. politics at its worst” before tossing it to the floor.

Lisman defended it Saturday. “I think here we have an opportunity for a race with two vigorous candidates and drawing a lot of people and attention and I think it’s going to help the race,” he said.